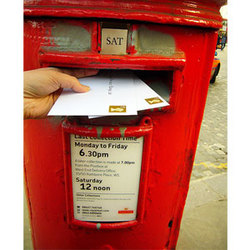 The probability that in the first 12 stages, the person who started the chain letter will not receive a letter is α. Find [1010α].