Light is too fast to catch! 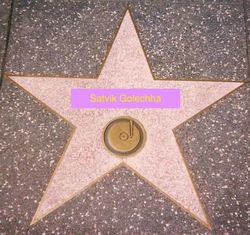 Once Satvik wanted to become a film-star. Hence, he entered the film industry and was called by a director there. The director offered Satvik a leading role in the film named 'Satvik - The Troll Hero'.

While shooting, the director used a camera having flash light intensity 59283 candela and placed the camera straight in line with Satvik's eyes. There were 2 more 'movable cameras' with flashlight intensity 59282 candela which were continuously moving.

However, while shooting Satvik's film something happens.

Which of the following happened?

This problem is an entry to Troll king Contest