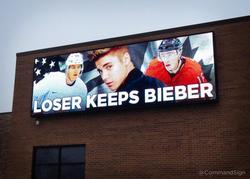 The Canada men's ice hockey team is playing USA in the Sochi Winter Olympics semifinal match. On top of the national pride of playing for the Olympic gold medal, Command Transportation has raised the stakes to include the deportation of Justin Bieber. Hence, it is paramount that USA wins.

With one period (20 minutes) left in the game Team Canada is leading 1 to 0. If Team Canada continues to play their usual attacking style, they have a 5% chance of scoring a goal and a 5% chance of letting in a goal in every minute of play. If they switch to a defensive style, their chance of letting in a goal drops to 4% per minute, but they would have virtually no chance of scoring. Suppose that if the regular play ends in a draw, there is a 50% chance of either team winning in overtime. Which of the following is the best approximation of the optimal general strategy for Team Canada?