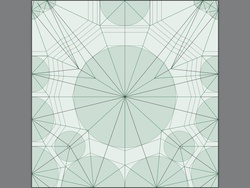 Origami is the ancient art of paper folding, which dates back all the way to the creation of paper! Not only is origami a marvelous art form, it is one of the best example of mathematics at work.

I have been doing origami for 10 years now, starting from simple, 2- fold boats and cranes, to doing origamis like Kamiya Satoshi's Phoenix, Ancient Dragon, and his over 1000-fold Ryu-Jin (Kamiya Satoshi is known to make the world's most difficult origami).

Origami creators show how to make their origami in two ways. One is the classic step-by-step guidance. However, that is time-consuming for the author. For more advanced origamis, origami masters publish crease patterns. Crease patterns are a lay out of the creases required to make the final model. Many thing can be inferred from a crease pattern.

Above is the crease pattern of Robert J. Lang's scorpion, a relatively easy model. By imagining how the creases coincide, can you tell me how many appendages the scorpion will have?

If there is not enough information, give the answer as 0