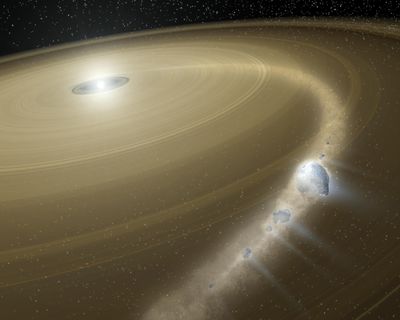 A comet in the Oort cloud falls towards the Sun. As it picks up speed from the Sun's gravity, it accidentally picks up a very tiny extra velocity boost from a nearby object in the solar system, so that its trajectory is now a true parabola. It eventually whips around the Sun and begins to travel back out into the far reaches of space. 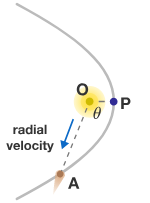 Let θ be the angle ∠POA, where point O is the center of the Sun, point P is where the comet has come closest to the Sun, and point A is where it is on the trajectory outward.

Express your answer to the nearest degree.


Note: Kepler orbits are commonly described by the polar equation r(θ)=1+ecos(θ)a(1−e2)​, where a is the semi-major axis, and e is the eccentricity. For a circle, e=0; for an ellipse, 0<e<1; for a parabola, e=1; for a hyperbola, e>1. Also, you may want to look up Kepler's laws and vis-viva equation.