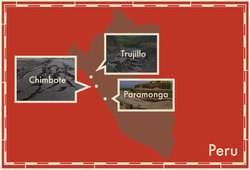 An earthquake creates various types of waves with different velocities, two of which are the P-wave and the S-wave that are detected with a seismograph. We can obtain the distance from the epicenter of the earthquake (in km), by multiplying the difference of arrival times (in seconds) by 8.

In Chimbote, if a local group of geologists had access to a helicopter that could fly at 180 kilometers per hour, how long would it have taken them to reach the epicenter to begin examining the fault for data?