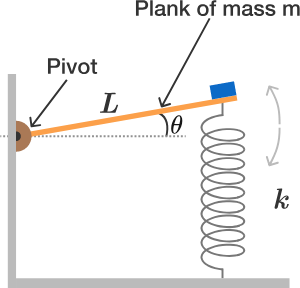 A horizontal plank of mass m and length L is pivoted at one end and is attached by a spring of force constant k at the other end.

A small mass M is glued at the free end of the plank supported by the spring.

When the plank is displaced upward by a small angle of θ from its equilibrium position and released, it undergoes simple harmonic oscillations at angular frequency expressed as ω=m+bMak​​. What is a+b?