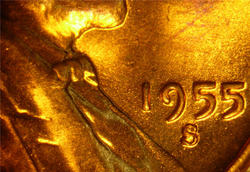 You've found a stockpile of 1955 United States pennies, which are now worth approximately twice as much as raw metal compared to their value as currency. A Fresnel lens can be used to concentrate incoming light onto a focal point.

For how many seconds would you need to focus the Fresnel lens on a penny in order to melt the entire coin?