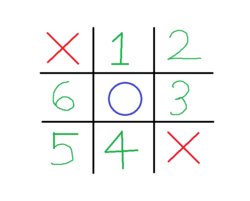 Once Prasun and Azhaghu were playing the famous game of Tic-Tac-Toe. Prasun plays the cross i.e ' X' and Azhaghu plays a circle i.e 'O'. In the above picture , now its Azhaghu's turn .If Azhaghu plays a wrong move, he definitely loses the game. So where can Azhaghu put a 'O' to defend himself from the trap of Prasun? In other words, where should Azhaghu's next move be such that he won't lose the game?

For more, try this set.