Reduced Obesity Rates Are Something To Celebrate, But Who Deserves The Credit? 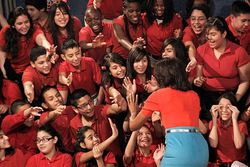 Michelle Obama program, Let’s Move, is celebrating it’s fourth year anniversary in Februray 2014. She credits her program for halting and even reversing the increasing childhood obesity trend of the last thirty years.

Michelle Obama stated "(Let’s Move) really changed the conversation in this country ... the good news in Mississippi is that they've seen a decline in childhood obesity of 13 percent, so we're gonna go celebrate and highlight what has been going on there. There's still work to do."

To what extent does the following data support the claim that Let's Move is responsible for the 13 percent decline?