WWII was the golden age of the dogfight, when enemies would lock their airforces in plane-to-plane aerial combat. Unsurprisingly, many planes were lost to crashes. If a bullet strikes a plane in a sensitive area, it's hard to make it back to base. For the planes that did come back, the mechanics kept track of the location of bullet holes in the fuselage, so that they could reinforce the planes in the vulnerable locations.

Suppose that for American planes, the bullet holes on returning planes were distributed as follows: 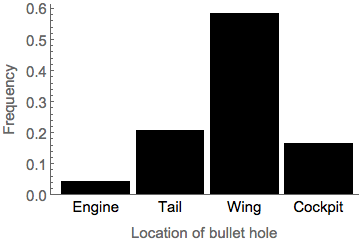 Where should the mechanics reinforce planes so that more of them come back safely?