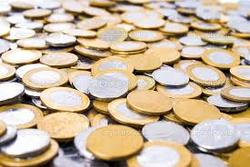 A rich man died. In his will, he has divided his gold coins among his 5 sons, 5 daughters and a manager. According to his will:

What is the minimum number of coins that the rich man had left behind?