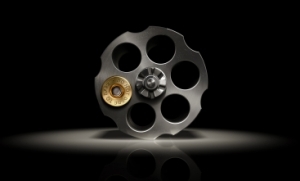 After meeting some unsavory characters playing CS:GO, the Russian mafia forces you to play Russian Roulette. You have survived Part 1, and they now pit you against another survivor.

A gun, which can hold 6 bullets, is chambered with a bullet. Both of you will take turns to shoot the gun (without spinning the barrel between turns), until one of you gets shot. By sheer blink luck, the mafia allows you to choose between going first or second.

To increase your chance of survival, should you: