SEAN and the TYrannosaurus Rex 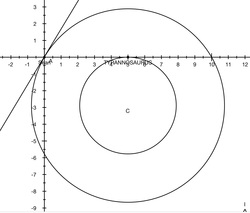 In this diagram, existing in the Cartesian plane, speedy SEAN is standing directly in the line of sight of a TYrannosaurus Rex. The dumb Tyrannosaurus is hungry, and it wants to eat Sean. Fortunately, Sean is a professional athlete who beat Usain Bolts' world record time by 5 seconds in last years Olympics. Also, the tyrannosaurus failed 1st grade and dropped out school that same year. The tyrannosaurus doesn't know how to do anything besides run directly at Sean (if Sean moves, the T-Rex will continue to run straight at his new position, thus its path will curve as Sean moves). Sean knows this, and decides to have a little fun. He wants to run in a perfect circle such that after one full rotation, he and the T-Rex end up in their respective starting places. At what angle (A in the picture) should Sean instantaneously start his circular run at.

Sean runs twice as fast as the Tyrannosaurus and the first instant he moves, he moves in the negative direction.

This is part of the set Trevor's Ten