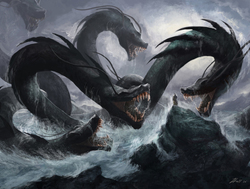 Out in the desolate clutches of the forsaken seas where the winds and rains know no sleep, rests a scroll upon which are written secrets that might drive one to insanity from merely reading them. Great and terrible knowledge, necessary for forwarding in a new age of civilization, yet dangerous in its ability to destroy. Our hero has gone through many trials to find this rock, and suffered many things for his journey, but now he is here, and but one obstacle remains.

Before the hero stands a mythological Hydra. It begins, graciously enough, with but one head. The hero has but one way to attack the beast - slice off its head.

But this is no sure method, for, with equal probabilities, a severed head of the Hydra may either wither into nothing... or sprout again as three, new, different heads. When such an event happens, the hero has no choice but to slice again at another head, each exactly like all the others - each head having the same chance of either withering away, or sprouting into three new heads instead.

Let P be the probability that the hero defeats the Hydra - that is, he succeeds in slaying every single head, and the last head he slays does not regrow. The alternative option being that he spends an eternity in battle with the Hydra, never defeating all of its heads.