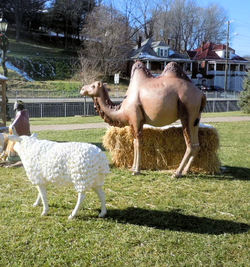 Ahmed and Ali were camel-drivers who wanted to become shepherds. So they went to the market and sold all their camels. The amount of money (in dinars) that they received for each camel was the same as the total number of camels they owned. With that money, they bought as many sheep as possible at 10 dinars a sheep. With the money that was left they bought a goat.

On their way home they got in a fight and decided to split up. When they divided the sheep there was one sheep left. So Ali said to Ahmed, "I take the last sheep and you can get the goat".

"That's not fair," said Ahmed, "a goat costs less than a sheep".

What's the cost (in dinars) of a dog?