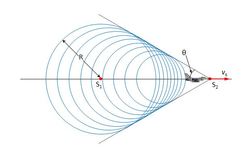 The above is a schematic diagram of the shock wave of a jet plane (the sound source) which is flying at a constant velocity of vs​. When the sound source moves from S1​ to S2​, the sound wave which was generated at S1​ progresses a distance of R as above. Which of the following explanations is correct? (The velocity of sound is v.)