Showdown at Shalour City Gym part-2 (Its you this time too!)

Little Pikachu who weighs merely a 500 g and has a height of 50 cm, is doing really a good job against Mega Lucario (who is really big in comparison to Pikachu). After giving a strong thunder bolt which hit Mega Lucario, Pikachu is standing in front of you (at rest) and waiting for you next order. You order Pikachu to do tackle. Pikachu dashes off. His final velocity on reaching Mega Lucario,(who was first at a distance of 10 m from Pikachu), was 10 m/s .How much time did it take Pikachu to reach Mega Lucario? Find the force Pikachu applied on Mega Lucario. 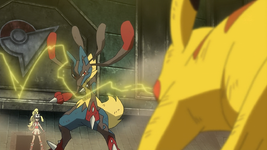