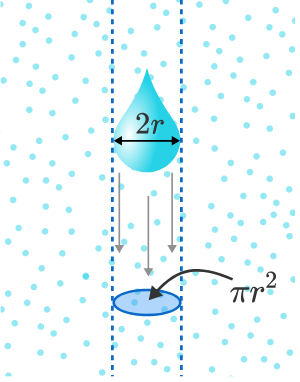 A raindrop falls from rest with a small initial mass, m0​. As it falls, it accumulates mass by absorbing the smaller water drops in its path, which we approximate by the uniform density ρatm​.

Throughout the fall, it maintains the same characteristic shape defined by its width, 2r, which increases as it picks up mass at the rate m˙=ρatm​πr2v (in time dt, it sweeps out a vertical cylinder of height vdt).

How will its velocity depend on time? Surprisingly, this complicated problem has a simple solution: after a short time, the raindrop will accelerate at the constant rate a=Kg​ (convince yourself of this!).

What is the value of K?

Inspired by a similar problem by Tapas Mazumdar