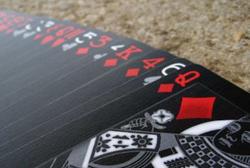 Mursalin likes to collect playing-cards. In fact he has 1374 decks of playing cards. One day he decides to take all of his decks and places them in a row on a (big!) table. He randomly takes out one card from the first deck and places it somewhere inside the second deck. Then he takes a random card out of the second deck and places it somewhere inside the third deck. He keeps on doing this with the other decks. He repeats the process until he takes out a random card from the 1374th deck and there aren't any more decks left. The probability that the last card selected is an ace can be expressed as ba​ where a and b are co-prime positive integers. What is a+b?

A regular deck of playing cards has 52 cards 4 of which are aces.

The image is taken from here.