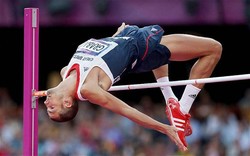 Five nations competed in the finals of the South Asian Track Meet. They were China, India, Singapore, Thailand, and Vietnam. The five events in the finals were: the high jump, shot put, 100 meter dash, pole vault and 4 by 100 relay. In each event the nation placing first received five points; the one placing second, four points; the one placing third, three points; and so on. Thus, the one placing last received one point. At the end of the competition, the points of each nation were totaled, and the totals determined the final ranking.

Each nation had exactly one entry in each event. Assuming there were no ties and the nations ended up being ranked in the same order as the alphabetical order of their names, in what position did "Satyajit Mohanty" of India rank in the high jump?