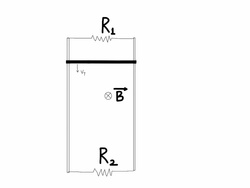 A system of long, parallel conducting rails is set up in the vertical plane and joined at both the ends by resistors as shown in the figure. A uniform magnetic field exists perpendicular to the plane of the rails denoted by B. A rod whose length is equal to the separation between the rails is allowed to fall freely and attain a terminal velocity. If the powers dissipated by the resistors R1​ and R2​ at steady state are 0.76 W and 1.2 W, respectively, then what is the terminal velocity of the rod?