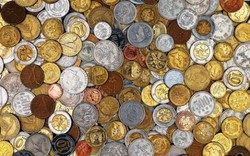 Aaron, Brian, Calvin, Daniel and Peter are going to divide n coins among themselves knowing that:

What is the smallest possible value of n such that there exists at least one possible configurational distribution of the coins such that nobody can deduce the number of coins received by each of the others without more information?