A math teacher had drawn on the blackboard a very carefully scaled figure of a triangle divided into six smaller triangles with three straight cuts as follows: 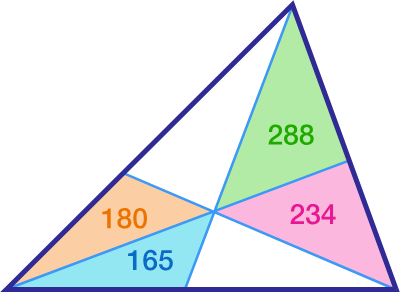 and he proceeded to write in the integer area of each of the six smaller triangles. But as he wrote down the area of the fourth triangle (as shown in this graphic), a bright student raised his hand and said,

"Mr. teacher, but that's wrong, you made a mistake with that number you just wrote!"

The teacher looked at his notes and realized his error, so he rubbed out the last digit of the area of the fourth triangle, put in the correct digit, and then continued to write in the areas for the fifth and sixth triangles.

What was the total area of the big triangle?