The King and the Mathematician 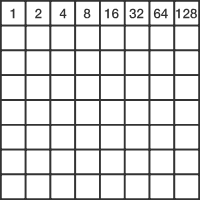 Once a man did a favor to a king that made the king very happy. Out of joy the king told the man to wish for anything and he would be granted. The man wanted to ask for the whole kingdom which was worth 1500 trillion dollars, but obviously that would make the king mad and he would never be granted that wish.

The man who happened to be a mathematician thought a little bit and said the following:

"Bring in a big piece of rug with an 8×8 grid in it. Starting from the top left square, put one dollar in that square. Put two dollars in the square next to it and then double of that, four dollars, in the next square and so on. When you reach the end of the first row, continue on to the next row, doubling the amount every time as you move to the next square, all the way until the 64th square at the bottom right."

The king agreed. What happened next?