The Man and the Murder

A man and his wife are at home one day, when they start to argue. In the heat of the moment, he stabs his wife to death with a kitchen knife. To hide the fact he killed her, he cleans the blood from all the clothes, cleans off any potential fingerprints, disposes the weapon in a lake, and puts his wife’s body in an alley where crime is common. Many hours later, the police call, tell him they have found his wife’s dead corpse, and ask him to come to the crime scene. When he gets there, he is arrested for 1st degree murder. How did they know he did it? 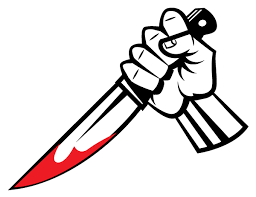