The Most Intelligent Prince 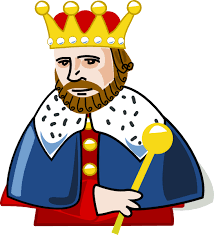 A king wants his daughter to marry the smartest of 3 extremely intelligent young princes, and so the king's wise men devised an intelligence test.

The princes are gathered into a room and seated, facing one another, and are shown 2 black hats and 3 white hats. They are blindfolded, and 1 hat is placed on each of their heads, with the remaining hats hidden in a different room.

The king tells them that the first prince to deduce the color of his hat without removing it or looking at it will marry his daughter. A wrong guess will mean death. The blindfolds are then removed.

Note: You know that your competitors are very intelligent and want nothing more than to marry the princess. You also know that the king is a man of his word, and he has said that the test is a fair test of intelligence and bravery.