The poisoning in the hospital 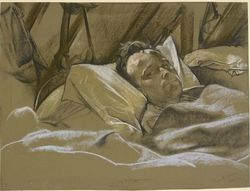 Six people were visiting Tycoon Tye in the hospital. Each of them entered the hospital once and only once, stayed there for some time, and then left. Furthermore, if two persons were in the hospital at the same time, then at least one of the two saw the other.

One person managed to poison the food that he was given. The detectives were called in and statements were taken:

If only the culprit lied, who did it?