The Stingy Rancher And His Fence 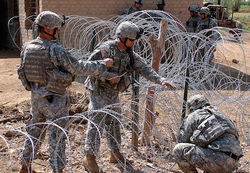 A rancher has been given a square mile of land, a perfect square with a perimeter of 4 miles. He decides he is going to fence in his property, but fencing costs money, and so he's only interested in fencing in the most land he can for the cost of the fencing, which is $1000 per mile. Let A be the area of the land fenced in, and B denote the total cost of the fence. When A/B is maximized, how much did he pay for fencing, expressed as ⌊B⌋?

This problem was suggested by Open Question...