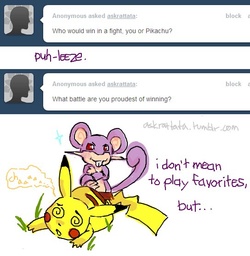 Pikachu and a wild Rattata have been battling for a long time. They have been fighting for so long that their accuracy is haywire, and their health is one on-target hit away from being a K.O. Any attack now, however powerful or weak, if on target, could defeat the opponent.

At this stage of battle, Rattata has 2 attacks. He can use Tackle, which has a 31​ chance of being on target. He can also use Hyper Fang, but only after 2 moves have occurred (i.e. Rattata moves, then Pikachu moves, then Rattata can use it or save for a later move). This attack has a 32​ accuracy rate.

In this battle, the highest probability of Rattata winning and defeating Pikachu is given by NM​ , where M,N are co-prime integers. Find M+N.