They are so many 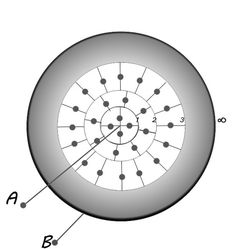 In the image above, gray dots are capacitors of capacitance 1μf.

That gray area shows that, there is infinite arrangement of capacitors, such that first circle has 4 capacitors , second one has 8 capacitors, third 16 capacitors and next 32 and so on, as shown.

Find the equivalent capacitance in μf between the two terminals A (at the center) and B (at infinity).