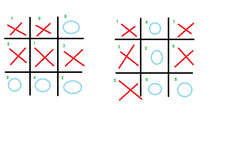 In the game of tic tac toe, also called "dot and cross" game, there is a 3×3 grid, and (say that) the player who makes first move makes a "cross". The player who plays next makes a "dot" . A player wins if his marks (dot or cross) come three in a row, that could be diagonally or vertically or horizontally.

If the players just play for completing the whole grid ,i.e play even after any 1 wins, then how many Final positions of the game are possible ?

Two of such examples are given in figure, players are not playing for winning, they are playing just to fill all the boxes.

(There will be 5 crosses and 4 dots in the final position as the player who makes first move will play 1 turn more.)