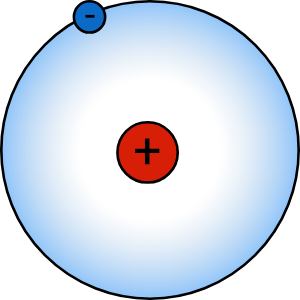 Hydrogen is the simplest atom, with only one proton and one electron interacting with a Coulomb potential of U=−4πε0​re2​. If the electron were a classical charged particle, its orbit around the nucleus would decay until it came to rest at the nucleus. Since the electron is a quantum object, this doesn't happen. One way to estimate the minimum radius allowed for a quantum electron is by saturating the Heisenberg bound, which puts a lower limit on the radius of the electron's orbit r and its momentum p: rp≈ΔxΔp≈ℏ. Treat the hydrogen atom as a two-body problem where the mass of the proton mp​ is much greater than that of the electron me​.

Estimate the minimum radius of the electron orbit rmin​.

Details: e is the charge of an electron, ε0​ is the permittivity of free space, and ℏ is the reduced Planck's constant.