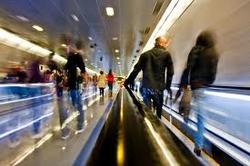 Bob reaches the end of the walkway, and having forgotten something, immediately turns around and walks back briskly on the walkway at 10 feet per second. After Bob has turned back, at a certain time, one of these three persons is exactly halfway between the other two.

At that time, find the distance in feet between the start of the walkway and the middle person.

Walkway - Fast and Furious I is available here.