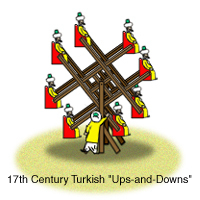 Juan and Pedro were both at the circus. Juan told Pedro beforehand that he (Juan himself) actually weighs 512 N. Pedro, who was an engineering student, was quite suspicious, so he asked Juan to ride the Ferris wheel, and took with him a fully-functional weighing scale as well.

As the wheel has almost completed its first cycle, and Juan and Pedro's cabin was near the bottom of the wheel, Pedro asked Juan to stand on the weighing scale. At the exact moment that their cabin was at the bottom part, Pedro measured his friend's weight as exactly 512 N.

Did Juan lie to Pedro when he told him before the ride that he weighs 512 N?

Details and Assumptions
- Their cabin was moving at a constant speed.
- The weighing scale used was unbiased, accurate, and precise.
- Treat Juan and Pedro as point masses.
- The situation was ideal, and all other factors other than gravity such as air, friction, etc., are neglected.