What can we learn from the financial crisis of 2008? 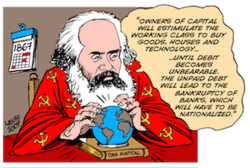 A: After the financial crisis of 2008, people responded by believing that such incidents are more frequent. This belief is irrational. After all, just because a rare event happens, doesn't increase the chance of it happening again.

B: To the contrary, the belief is rational because people had a wrong belief of the probability, and would have updated it after the incident.

B’s attempt to counter A’s claim is best described by which of the following?