Which Door To Take? 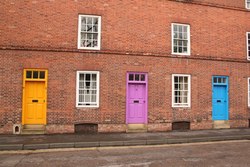 Kyle, Neal, and Grant find themselves trapped in a dark and cold dungeon (HOW they arrived there is another story). After a quick search the boys find three doors, the first one red, the second one blue, and the third one green. Behind one of the doors is a path to freedom. Behind the other two doors, however, is an evil fire-breathing dragon. Opening a door to the dragon means almost certain death. On each door there is an inscription:

Red door: Freedom is behind this door

Blue door: Freedom is not behind this door

Green door: Freedom is not behind the blue door