Will the ice crack? 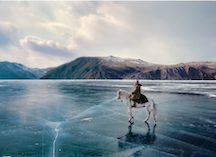 Ice has formed on a shallow pond and a steady state has been reached, with the air (above the ice) at −5oC, and the bottom of the pond at 4oC.

If the total depth of ice + water is 1.4m, then find the thickness of the ice (in m) layer on the pond.

Note: This problem appeared in our AITS (All India Test Series)