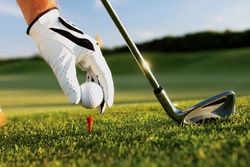 Trevor and I were playing golf.

As we all know, Trevor is a pro golfer and I don't know squat about golf (except the fact that we are supposed to hit golf balls with a club).

Now, I opened my wallet and I saw that it was emptier than a banker's heart. Amongst the cobwebs and flies in it, luckily, there was a $1 bill. Naturally, I accepted the bet since I'm almost broke and need cash.

I want to have at least a 90% chance of winning the bet. What is the minimum value of N that I should choose?