Suppose we aim the cue ball at the cushion with some angle of incidence θi​​=90∘. How will θi​ compare to θr​, the angle of reflection? 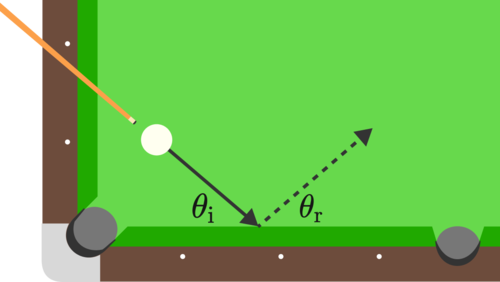 Fill in the blank:

a and b are positive integers such that

Amy makes bracelets out of colorful rubber bands. Playing around with the rubber, she notices that the red rubber bands are much stiffer than the blue ones. To get uniformly elastic bracelets, she tries to combine red and blue bands in equal parts. As a first step, she makes three different types of chains from the rubber bands outlined in the figure. However, while trying out the chains, Amy is surprised to find that one chain is much stiffer than the other two. Which rubber chain is it? 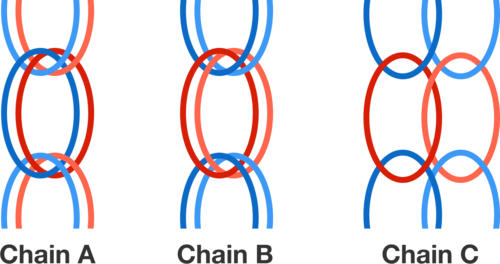 In 1838, Samuel Birley Rowbotham conducted observations leading him to conclude the earth was flat. His idea was the following: If light goes straight and I'm standing at A with my friend, there must be a point B where I can't see him.

Assuming light does not bend because of atmospheric refraction, which of these is closest to the minimum arc length of AB⌢ that would prevent Samuel from seeing his friend? Assume they are both 1.8 meters tall and the radius of the earth is 6,371,009 m.

Note: Though the earth is (of course) not flat, Samuel was able to see his friend at a farther distance than he was supposed to. This is due to atmospheric refraction, i.e. the non-homogeneous density of air creating a slight deviation of light. Without knowing this effect, a newspaper editor performed in 1896 the same experiment and concluded the earth was concavely curved.

The integers 1 through 12345 (inclusive) are written in a row in ascending order. You and your friend take turns removing numbers according to the following rules: 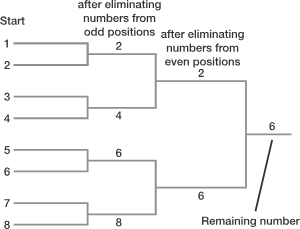 What is the last number remaining after completing these steps?


Note:
The diagram to the right illustrates the case for a list of numbers 1 to 8.