You also know that one contains treasure and the other will release a deadly gas, but again, you don't know which.

Is it possible to make a statement that will cause only the chest with treasure to open?

Hint: Each statement is either true or false. It is not possible for a statement to be a paradox!

If a teacher randomly reallocates their seats, what is the probability Pn​ that none of these n students sit next to their good friends?

Submit your answer as the limit n→∞lim​Pn​.

The Friedmann equation, derived from Einstein's theory of general relativity, describes the expansion of the Universe after the Big Bang. The equation is, in a slightly simplified form, (aa˙​)2=H02​(a31−Ω​+Ω), where Ω is the fraction of dark energy in the Universe, H0​ is the Hubble constant today, and a(t) is a dimensionless "size factor" selected so that its value today is a=1 (for example, a(t)=R(t)/R0​, the distance R between Earth and a distant galaxy at time t divided by the current distance).

Based on the solution of this equation, what was the scale factor a when the Universe was half of the age today?

Notes: Use Ω=0.68. The quantity 1−Ω=0.32 represents the fraction of matter (regular and dark) in the Universe. The Hubble constant is H0​=14×109 years1​. We neglected the energy contained by radiation and assumed that the Universe is flat, i.e. the matter and energy fractions add up to 1. 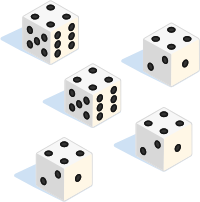 I play a round of the game "Yahtzee!", and my goal is to obtain the namesake combination: 5 dice all showing the same number.

What is the probability that I will be able to accomplish this?

The probability can be expressed as ba​, where a and b are coprime positive integers. Enter your answer as a+b.

The surface of a soccer ball is covered with pentagons and hexagons in such a way that one pentagon and two hexagons meet at each vertex.

The fraction of the pentagonal area on the surface of the polyhedral soccer ball can be expressed as F=φ+a−bφ2​φ​, where φ=21+5​​ is the golden ratio, and a,b are integers. What is a−b?