Ever wondered how lightning occurs? Or why you see sparks when you remove your sweater in a dark room? Then you are in the right place. Electrostatics is the branch of physics which can help explain these amazing wonders. It is very vital because it can be used to explain natural electrostatic phenomena and help us learn how to solve basic problems in this field. So what next? Let us explore this world of interesting phenomena! 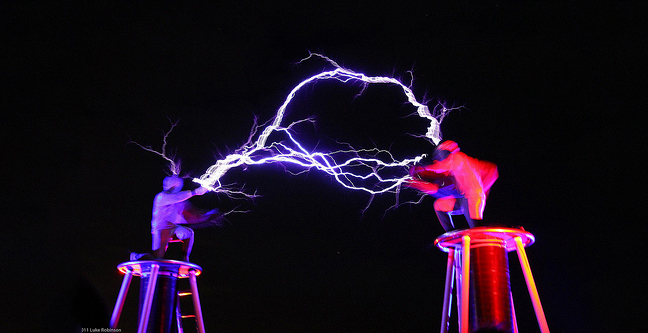 The charges observed in the universe are of only two types: positive and negative. These charges interact in different ways; in general, we can say that like charges repel each other and unlike charges attract each other. To be specific, they interact in the following ways:

Note: Charges are conserved, i.e. charges can neither be created nor destroyed.

Let us now understand one of the most basic concept of electrostatics: quantization of charges.

One of the most basic principle that many people fail to understand is the quantization of charges, according to which a charge can only be an integer multiple of the elementary charge e=1.6×10−19C. Mathematically, we can say

But this is very simple because we know that the charges, which are nothing but protons (+ve) or electrons (-ve), are indivisible. Hence a charge can't be a fraction, because protons can't be further divided.

But if we consider quantum physics, protons can be further divided into things called quarks, which have fractional values of e, more specifically in the ratio of one-thirds. But they are always found in a colony (as protons). 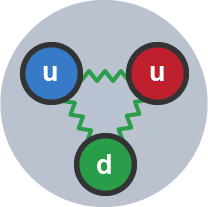 Now that we have understood that a charge can never be a fraction, we'll try to get familiar with the force between two charges with the help of the famous Coulomb's law.

Now, we introduce a constant of proportionality k (Coulomb's constant):

Here, the quantity ϵ0​ is known as the permittivity of free space. This formula gives us the magnitude of the force exerted between the two charges. For more details visit Coulomb's law. 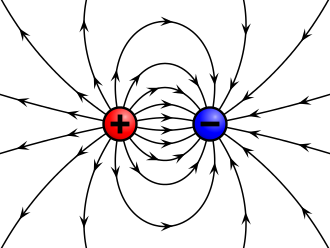 Two charges q1​ and q2​ are separated by a certain distance, and they experience a force of 36μN. If the distance between them is increased by 5 m, the force becomes 25μN.

Find the initial distance between the two charges (in meters).

Field lines around a positive and negative charge

But when two charges interact with each other, things are different. We can classify it into two cases: first when two charges are unlike, and second when they are like. The image below can help you understand it:

But if we want to quantize the electric field, we do it this way, mathematically,

Every charged particle or a system of charged particles in the universe creates an electric field in the space around itself. This field can be calculated with the help of Coulomb's law. But, what would happen if there were two or more charges in space? How would the electric field in the region around them be affected? The principle of superposition helps us understand this phenomenon.

The Principle of Superposition:

It states that every charge in space creates an electric field at a point independent of the presence of other charges in that medium. The resultant electric field is a vector sum of the electric field due to individual charges.


Charges in a Straight Line:

According to the principle of superposition, each charge creates its own electric field independent of the other charge. Let the electric fields by q1​ and q2​ be E1​ and E2​, respectively.

Charges in a Triangle:

Three charges q1​,q2​ and q3​ are placed at the vertices of an equilateral triangle of side length a in vacuum. Find the magnitude of electric force experienced by charge q3​.

Let us consider the interaction of the charge q3​ with each of the two charges separately. 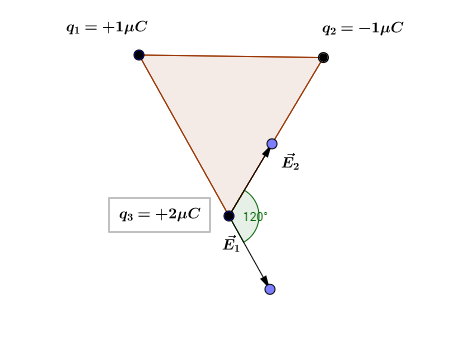 Three equal charges are placed in such a way that they form a right triangle with sides 3 cm,4 cm,5 cm. Each charge has a magnitude of 2×10−6C.

Find the net force acting on the charge at the right angle.

Try solving this problem by applying the concepts of charges in a straight line and triangle. 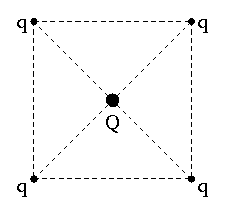 It is required to hold four equal point charges +q each in equilibrium at the corners of a square. Find the charge in Coulombs, Q, that will do this if kept at the center of the square.

Charge distribution between plates can be figured out using the following basic principles:

Charges in a Sphere: 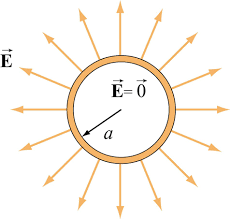 Consider the below situation: 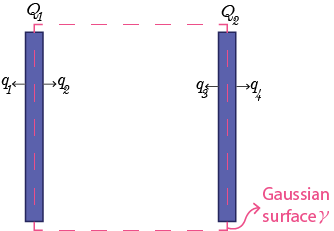 There are two charged plates with initial charge Q1​ and Q2​, respectively. To find the charges inside and outside respectively of both the charges, we use the above-mentioned rules along with Gauss' law. 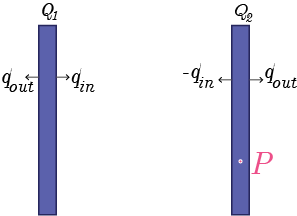 What happens to the charges in an object when an electrified body is brought towards it? Charges present in an object can rearrange themselves under the influence of an electric field, depending upon the nature of the field.

When an uncharged object is placed in an electric field, its charges rearrange themselves. The electrons move away from the direction of the field, while the positive charges are displaced towards the electric field. This effect is known as polarization. The charges align themselves in the following manner:

In the above diagram, (A) is the distribution of electrical charges in an object, being influenced by a nearby electrified body (B). What are the object (A) and the type of charge on (B), respectively?

Electrostatics is the field of physics and especially electrodynamics that has many examples that can be seen in real life. Out of all of them, lightning and the Van de Graaff generator are a couple, one of which is natural while the other is one of the most ingenious human inventions ever.

We are going to discuss both of them in detail below, and hopefully show you the utter beauty of science, especially physics.

So, we have all seen lightning. It is that spark in the sky when the weather isn't too nice. But, trust me when I say that it is not as boring as it seems! We all know from the previously discussed topics that 2 bodies which have a potential difference will always cause charges to flow from a higher potential region to a lower one. Well, that is what all lightning is!

During a storm, or in a humid weather, the air between the clouds and between the clouds and the ground gets partially ionized, i.e. it allows the charge to flow through it, unlike the neutral air we have in hot weathers. So, this causes a potential difference to be developed between the two surfaces, which further causes a flow of charges, and hence an electric shock is produced in the form of a zig-zag projectile. This type of sudden discharge occurs because both the bodies posses a very high amount of charges, because of which they become very unstable, and hence they come to equilibrium by this process.

Now, the basic question that arises is, "Why zig-zag?"

The reason is simple. The path of least resistance is the path that is the motive of every single charge in the lightning strike. Moreover, the entire atmosphere varies with humidity, temperature, pressure, and what not as we move along it. This causes fluctuations in its resistance, and hence the path is never straight, but rather it is one of the millions of possibilities that a lightning surge could have taken! 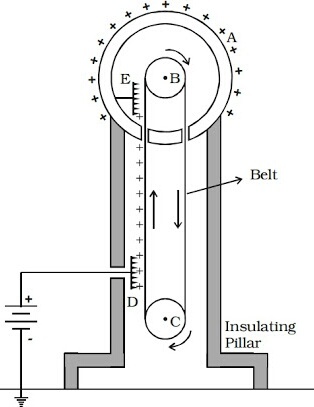 So, the next application on our list is the amazing Van de Graff generator. According to me, it is one of the best inventions by the human mind, but its principle is pretty simple.

So, picture this: you want to create a very high potential barrier or a very high potential difference between an object and its surroundings. If you would go the traditional way of accumulating the charge from the outside of the object, it would get really harder as you go on, as you'd have to face increasing amount repulsions. To overcome this problem, and to create large potential differences, that could be used in various fields; for example, in accelerating a subatomic particle, we use this device.

The working of Van de Graaff generator is pretty cool, to be honest. What happens is that we use the principle of the motion of electric charge from a higher potential to lower potential. In the above diagram, you can see a pointed object D at the bottom and a pointed object E at the top. These are known as brushes and they help in collecting or depositing charges.

The brush D deposits a positive charge on an insulated and rotating sheet, which then transports this charge to the brush E, which in turn lets the charge flow through it, and deposits it on the larger sphere in the end. In this way, we can create a potential difference of millions of volts, and only stop when we reach the breakdown voltage of the environment surrounding the apparatus.

Now the question arises, "Why won't we face the similar repulsions as before?"

That's a perfectly logical assumption to make, but the problem is that, now, we are transporting the charge not against the charge on the bigger sphere (as all its charge is on its outer surface). Moreover, with a little more mathematical manipulation, you can clearly show that the potential of the bigger sphere will always be greater than the inner pulleys, in case of a positive charge.

In the end, if you are even a teensy bit interested, I'd highly recommend you to check out this collection of electrostatic experiments and lectures by a professor at MIT, who's really good at what he does. (Trust me! :P)