Nim is a combinatorial game, where two players alternately take turns in taking objects from several heaps. The only rule is that each player must take at least one object on their turn, but they may take more than one object in a single turn, as long as they all come from the same heap.

Nim is the most well-known example of an impartial game, a game where both players have the same moves all the time, and thus the only distinguishing feature is that one player goes first. It is also completely solved, in the sense that the exact strategy has been found for any starting configuration.

The basic Nim begins with two players and several heaps, each containing several objects. Occasionally, heaps are also called piles, and the objects are called stones.

Each player, in turn, must take at least one stone, but they may take more than one stone as long as they all come from the same pile. It's allowed to make a pile empty, effectively removing the pile out of the game. When a player is unable to move, the game ends. Naturally, as long as there is a stone, either player can take that stone, and thus can move. So the ending condition can be rephrased, where the game ends if there is no stone left.

Consider the following example of the game. There are three piles, initially having 3,4,5 stones respectively. Alice and Bob are playing, with Alice starting.

In the above game, Alice has played a perfect game, never letting Bob to be able to snatch the win. This can be generalized into a general strategy.

The nim-sum a⊕b of two non-negative integers a and b is defined as follows. Represent a and b as sums of distinct powers of two. Cancel powers of two appearing twice, and add up the remaining numbers. Nim-sum is also known as XOR by computer scientists.

It can be shown that ⊕ is associative, thus making the nim-sum of several numbers a1​⊕a2​⊕…⊕an​ defined.

The following proof is for normal Nim's strategy, given by C. Bouton.

The moving player wins in normal Nim if and only if the nim-sum of the pile sizes is not zero.

We will begin with the easy base case: if the pile sizes are all zero, then the moving player loses and the nim-sum is zero. From now on, assume that not all pile sizes are zero.

First, we observe that the nim-sum obeys the following several properties for all non-negative integers a,b,c:

Now we will prove two results.

Result 1: If s=0, then t​=0. If the nim-sum of the original sizes is zero, then the moving player is losing (they must make the nim-sum nonzero).

Thus ak​=bk​. But this contradicts the fact that the moving player moved on pile bk​, and thus must make the size different.

Result 2: If s​=0, it's possible to make t=0. If the nim-sum of the original sizes is not zero, the moving player is winning (they can make the nim-sum zero).

This proves the theorem. □​

The strategy given above for misère Nim is correct: follow normal Nim strategy, except that when the moving player is going to make all pile sizes less than 2 stones, the moving player makes the number of piles of 1 stone odd instead of even.

The only change is when the moving player needs to reduce the single pile having size 2 or more to less than 2 (other piles have sizes no more than 1).

Once the moving player decides the move, the rest of the game is forced; with an odd number of 1-sized piles and the opponent starting, the opponent will also take the last stone, thus losing.

This proves the correctness. □​

There are many variations of Nim. The most well-known ones are normal Nim and misère Nim; in several textbooks, normal Nim is considered to be the standard game and misère Nim is the variant, while in others, it's the other way around. Due to Nim being a very basic game, there are so many possible variants obtained by simply adding one extra rule; this list doesn't intend to cover all possibilities, only the well-known ones.

A variant is known as subtraction game. This is equivalent to Nim, but where the number of stones taken is limited to some set of positive integers: for example, the first k numbers or the square numbers. Generally, this is played with one pile only.

Usually, Nim is played with the stones clumped together in heaps. A variant places the stones in rows so that taking stones in the middle of a row breaks the row into two. In other words, a player's move is to take at least one stone from a pile and optionally split the pile into two piles. Kayles is played with a single pile, allowing splitting, but a player may take at most 2 stones at a time. Dawson's chess is another variant of Kayles, where a player may take at most 3 stones at a time; however, taking one stone is only allowed if it's the only stone in a pile, and taking two stones doesn't allow splitting. Circular Nim is played with stones initially arranged in a circle, so the first time the pile is played on, it cannot be split; additionally, one can only take no more than 3 stones.

A generalization of Nim is the octal game. Players take turns removing several stones from a single heap in each turn, just as in usual Nim; however, the rules that govern when and how a heap can be taken and/or split are compactly noted as an octal number. For the octal game 0.d1​d2​d3​d4​…​, the digit dn​ specifies how many heaps are allowed to be left after removing n stones from a heap. dn​ is the sum of

As an example, Dawson's chess has the octal game notation 0.137:

Wythoff's game is a variant of Index-k Nim, where the number of stones removed from all piles affected must be the same. Usually, Wythoff's game is played with only two piles. The strategy is very different; the two-pile game is solved, involving Beatty's sequences using φ and φ2.

Grundy's game is even more different in that stones cannot be taken. The only allowed move is to split a pile into two differently sized piles. This will still end the game since the number of piles will be limited by the number of stones and it keeps increasing.

Unbalanced Nim has the extra rule that any two heaps may not be equal in size. Heaps of zero objects may or may not be counted as heaps; in the former option, this makes the ending position different, as 0,1,2,…,n−1, where n is the number of heaps.

Even more quirky variants are greedy Nim, where a player may only take stones from the currently largest pile—any such largest pile if there are many—and building Nim, where the players begin with placing n stones into p piles before playing a game of Nim with the result, so that the starting position is not known until the end of the building phase.

The Sprague-Grundy theorem is more fully developed out on this page.

Any position of an impartial game is equivalent to a Nim pile of a certain size. 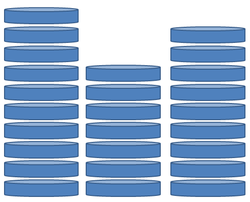 Neither Dan Sam Both

Dan and Sam play a game on a 5×5×5 cube that consists of 125 objects; each one must take at least one object and at most a whole heap, in his turn.

As an explicit example, in the first turn, Dan can take just the bottom front left corner object, or the whole vertical central heap, or the whole bottom front horizontal heap. Thus, he can take any number of objects of one of the 125 initial heaps (heaps cannot be diagonals).

The winner is the one who takes the last object. If Dan begins, who will win? This means, who has a winning strategy? 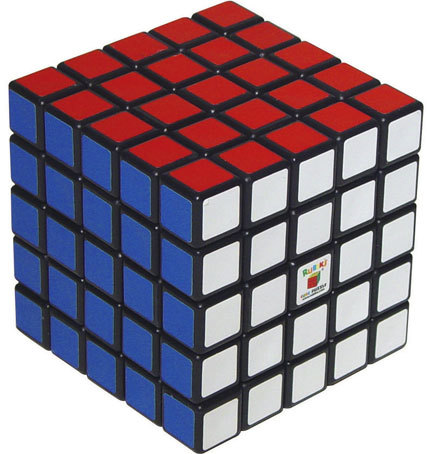 This is the fifteenth problem of the set Winning Strategies.

Dan and Sam play a game on a 4×9 grid, in which one takes squares (red) and the other takes circles (blue). Once the game starts, they take turns moving a single piece in their turn. Each piece can only be moved straight forward or backward, any number of grids (and cannot skip over the opponent's piece). This is the initial position:

A player loses when he is not able to move any of his pieces in his turn. If Dan goes first, who will win? In other words, who has a winning strategy?

This is the twelfth problem of the set Winning Strategies.

Alice and Bob are playing a game called Moving Chips. The game is played on an n×m board where some cells have some chips on it. Two players move alternately. Each turn consists of one person moving a chip to any cell to its left or any cell to its top. For example, the possible movements of chip A on a 3×5 board are as follows: 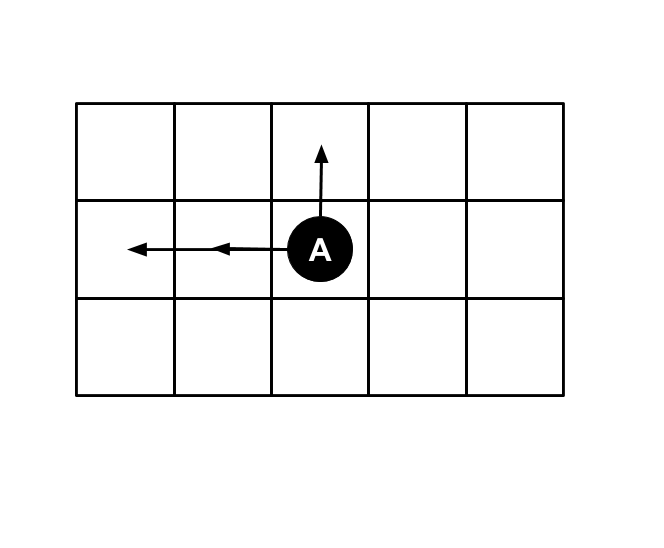 Consider the configuration below. Alice will move first. Assuming that both players move optimally, who will win the game? 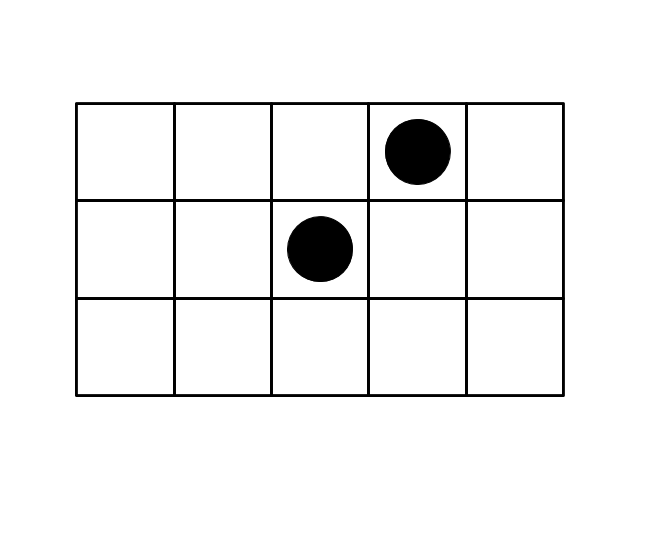 Do you have a generalized strategy for this problem? Then you might enjoy the Large Data version!