Bell's theorem is an important philosophical and mathematical statement in the theory of quantum mechanics. It showed that a category of physical theories called local hidden variables theory could not account for the degree of correlations between the spins of entangled electrons predicted by quantum theory. The commonly accepted conclusion of the theorem is that quantum theory is inherently nonlocal in some way, although this is a topic of intense philosophical debate.

Mathematically, Bell's theorem is justified by an important lemma, the CHSH inequality. This inequality bounds the amount of correlation possible between electron spins in a hidden variables theory. The violation of the CHSH inequality in both the theory and experimental results of quantum mechanics proves the theorem.

The historical importance of Bell's theorem is that it proved Einstein, Podolsky, and Rosen [EPR] incorrect in their discussion of the EPR paradox. EPR advocated a philosophy of science called local realism. This philosophy specified that interactions should not be able to communicate instantly across large distances (nonlocally) in violation of relativity, and that systems ought to have a "realistic" definite value of quantities before these quantities are measured.

However, experiments measuring the correlations between spins of entangled electrons seemed to communicate spin states instantaneously between locations (nonlocally). EPR thus concluded that quantum mechanics is incomplete; there must have been some extra hidden variable that set the responses of the entangled electrons to spin measurements at the beginning of the experiment, when both electrons were generated at the same site.

Bell's theorem: No theory of local realism such as a local hidden variables theory can account for the correlations between entangled electrons predicted by quantum mechanics.

The experimental results of quantum mechanics have several loopholes that the past fifty years of research in quantum theory has worked to close. Below two of the major loopholes are discussed:

It is possible that the detectors at spin measurement sites have less than 100% efficiency, and only detect highly correlated spins, allowing uncorrelated spins to remain undetected. Thus, experiments would report a higher correlation than actually exists, meaning the actual amount of correlation might be explainable by a local hidden variables theory. In the best case scenario, any detectors below 67% efficiency would not close this loophole; in the standard case, about 83% efficiency is required.

Traditional Bell test experiments have ignored this loophole by postulating the fair sampling assumption, which states that the spins measured at each detector are a fair representation of the actual distribution of entangled quantum states produced. While this seems intuitively physically reasonable, it is impossible to prove.

Since it takes a small but nonzero amount of time to actually perform spin measurements and report the result, it is possible that after one spin is measured, the detector somehow communicates the result at lightspeed to the other detector, which is able to influence the spin of the other particle at measurement time. The only way to close the communication loophole is to separate the two detectors by a large distance and perform spin measurements in such a small amount of time that light could not have traveled between the detectors. This causally separates each detector from the other's influence.

It has been suggested that the late 2015 result has not quite closed all loopholes due to the possibility of communication between detectors in the past before the entangled electrons were emitted, which might have been able to correlate detectors in some way. This is known as the setting independence loophole. There exists a currently proposed experiment [2] designed to circumvent this loophole by configuring detector settings using light from two very distant galaxies so far separated that light has not traveled between the two since the big bang. As a result, the detector settings will originate from sources not in causal contact, which means that it will be impossible for the detectors to have become correlated at any point in time.

The proof of Bell's theorem considers an arbitrary local hidden variables theory and shows that any such classical theory attempting to mimic the results of quantum mechanics gives measurement results constrained by an inequality called the CHSH inequality for Clauser, Horne, Shimony, and Holt, although this inequality is also often referred to slightly incorrectly as Bell's inequality.

The CHSH inequality is as follows:

The formal derivation of these inequality is fairly extensive, since it introduces a possible hidden variable and then defines the expectations in terms of integrals involving this variable. However, the intuition behind it is simple: each of the expectations along orientation a, a′, b, and b′ is at most 1, because each correlation is at best 1 in a classical theory. So one has three plus signs and minus sign in a sum of terms that are bounded by one in absolute value; thus, the sum is bounded by 2. The tricky part of the derivation lies in manipulating the integral expressions that define the correlations to obtain nice inequalities that don't depend on the hidden variable or detector angle.

An easy example of the violation of the CHSH inequality occurs in experiments measuring the spin in the entangled singlet state of two spin-21​ particles:

The desired correlations in quantum mechanics can be found by taking the expectations of spin measurements made at two Stern-Gerlach apparatuses. Letting A(a) be a measurement performed at apparatus A in orientation a and similar, consider the following four possible measurements:

Substituting into the left-hand side of the CHSH inequality, one finds:

This violates the bound of 2 predicted in a local hidden variables theory, as a result of quantum entanglement!

Below, the correlation E(a,b) as a function of angle between orientations a and b is plotted. The disparity between the classical and quantum predictions is evident, especially at the 135 degree difference used in the above calculation, where each correlation took value 2​1​ where it would have correlation at most 21​ in local hidden variables theory. 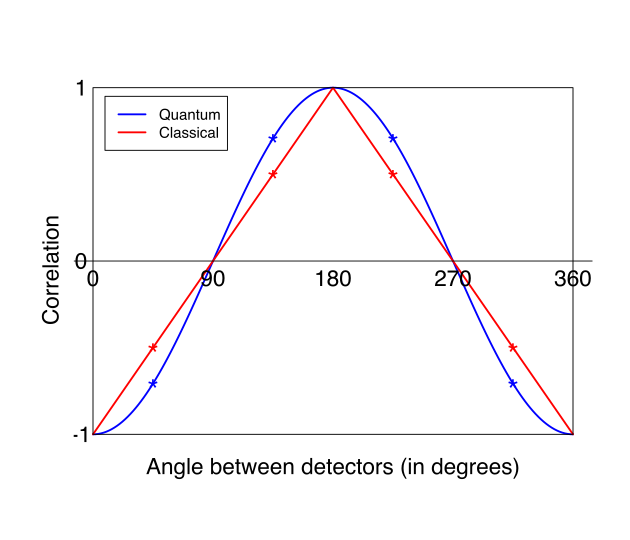