Chaos theory is the study of a particular type of systems that evolved from some initial conditions. A small perturbation in the initial setup of a chaotic system may lead to drastically different behavior, a concept popularly referred to as the butterfly effect from the idea that the actions of a butterfly may dramatically alter the physical state of the rest of the world. Although the behavior of chaotic systems may seem scattered and random, chaotic systems are strictly defined to be deterministic, meaning that a particular set of initial conditions always evolves in the same way.

Chaotic maps can be either discrete or continuous functions where slightly different initial values are gradually mapped further and further apart over time. Typically, they are given either in terms of recurrence relations for discrete maps, or in the time domain for continuous maps.

There are three required mathematical properties for a system to be classified as chaotic:[1]

In certain cases, the second two imply the first mathematically. However, as discussed below, each of the three conditions captures different qualitative aspects of chaotic systems in general. Each is defined as a condition on the phase space of a dynamical system. In one dimension, the phase space is the two-dimensional space whose axes are the position x and velocity x˙ of a point; in higher dimensions, the axes are the positions and velocities in each possible direction.

The exponent λ is called a Lyapunov exponent. In d spatial dimensions, the phase space is 2d-dimensional, so there are 2d Lyapunov exponents: one for each direction of separation of the states in phase space. Systems are often characterized by the largest of these exponents; if the largest exponent is positive, the separation grows exponentially in time (at least locally) and the system is chaotic. If the largest exponent is negative, the trajectories of the initial conditions z0​ and z0′​ stay close in phase space, so closely separated trajectories are good approximations for each other and the system is not chaotic.

Sensitivity to initial conditions alone is not enough to make a map chaotic. For instance, consider the dynamical system generated by the map:

Consider two starting points z0​=0 and z0′​=0.1. The evolution of each point is displayed in the diagram below: 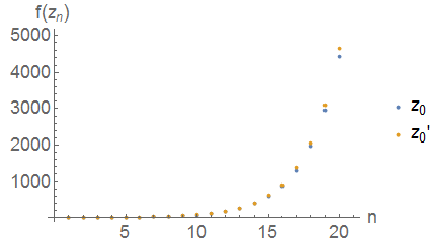 Since the map generating the system multiplies by 1.5 and then adds one, any small difference between starting points is magnified by a factor of 1.5 at each step. However, the system is not chaotic: regardless of the starting point, every point approaches positive or negative infinity, so the asymptotic behavior given a set of initial conditions is very predictable.

The topological mixing condition is designed to exclude such cases. It essentially says that given any possible set of states for the dynamical system, a given set of initial conditions for the system will eventually evolve to at least some of the states in the set. Topologically, this can be stated as follows: any open set in the phase space of the dynamical system eventually intersects any other given open set in the phase space.

Consider the dynamical system generated by the discrete recurrence

Is this system chaotic?

Which condition is most likely to be a quality of only dynamical systems that are chaotic?

A complex quadratic polynomial is a standard quadratic equation where the variable involved can be a complex number. A particularly simple example of this is the polynomial

for some constant c. One can define a dynamical system from this map via the recursion zn+1​=f(zn​). In this case, the dynamical system defined is chaotic. In fact, given z0​=0, the system diverges as n→∞ except when c takes values on a fractal set, the Mandlebrot set. 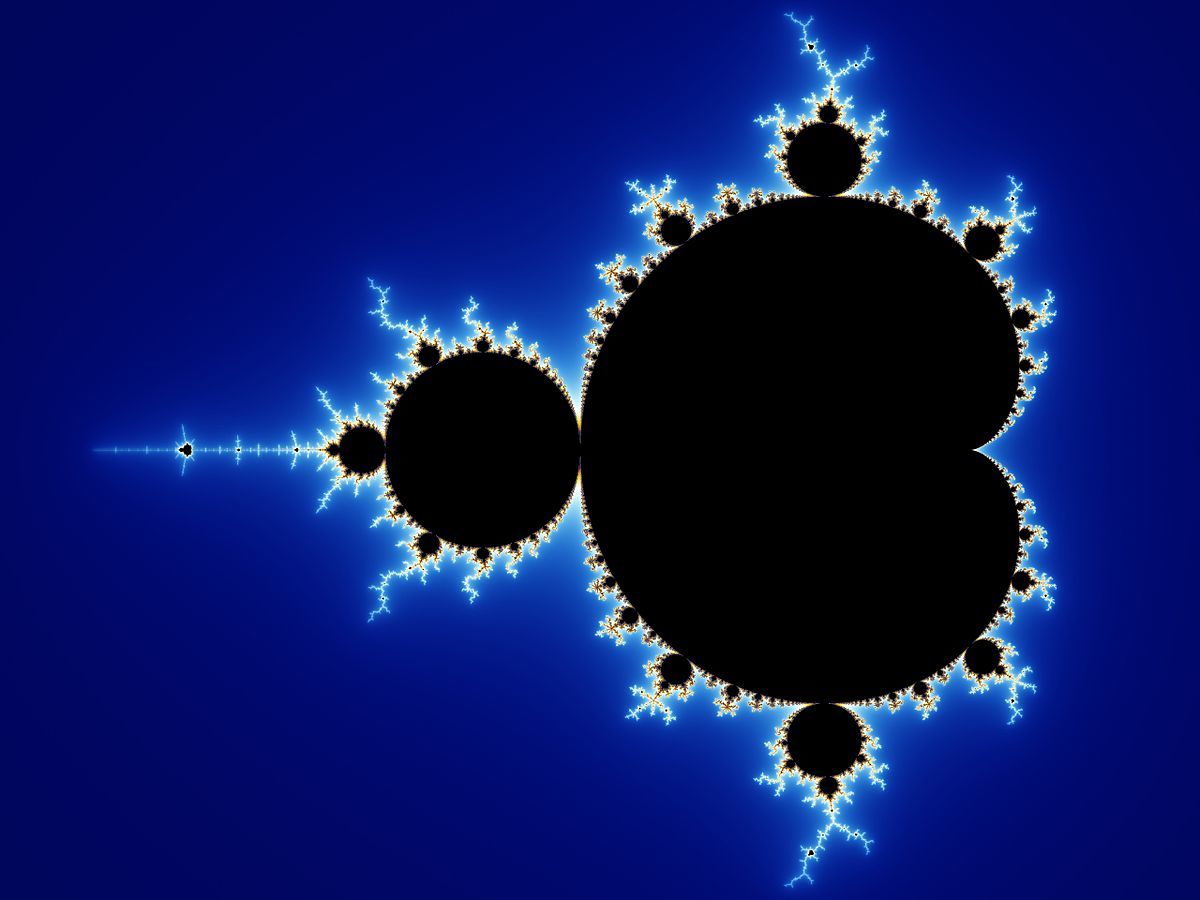 The fractal known as the Mandlebrot set. The complex quadratic map converges wherever the plot is black, and diverges at a rate according to the intensity of color elsewhere. By Wolfgang Beyer, CC BY-SA 3.0, https://commons.wikimedia.org/w/index.php?curid=321973

The Rössler attractor refers to a dynamical system given by the following set of first-order ODEs in three dimensions:

for a,b,c real parameters. It is similar to the well-known chaotic map called the Lorenz attractor, although mathematically simpler. Notably, the Rössler attractor has been used to study equilibria in reaction chemistry. 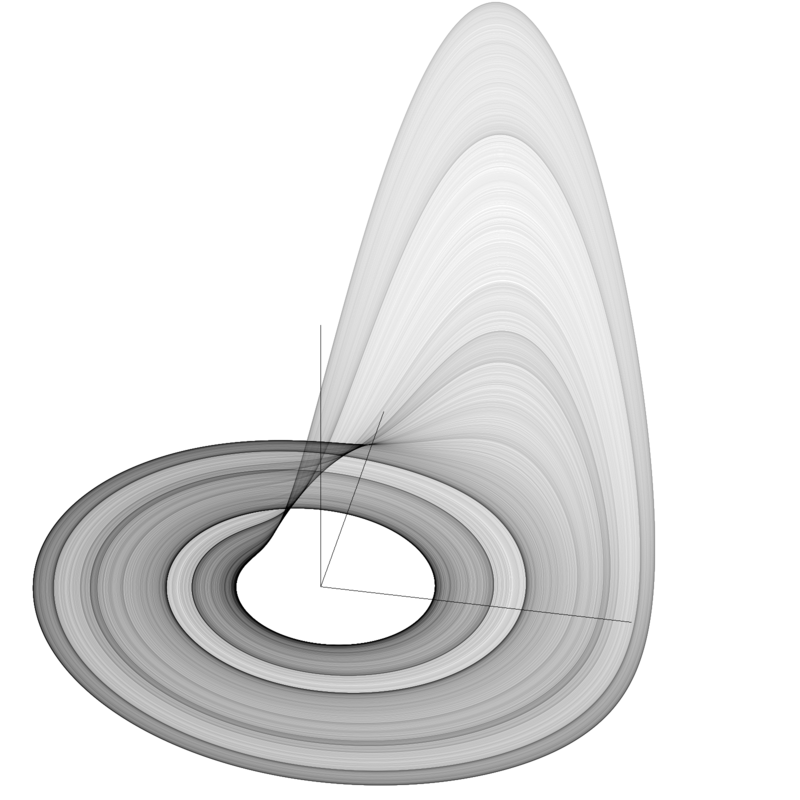 A set of orbits of the Rössler attractor given some set of parameters a,b,c. By Wolfl - Own work, CC BY-SA 2.5, https://commons.wikimedia.org/w/index.php?curid=346875

The double pendulum is one of the simplest scenarios in physics where chaotic behavior is manifest. Hamilton's equations of motion for the double pendulum yield four coupled first-order ordinary differential equations, which is a sufficient condition for chaos. The below animation shows the highly unpredictable evolution of the double pendulum given a particular initial configuration.

Chaotic evolution of the double pendulum over time. By Catslash - Own work, Public Domain, https://commons.wikimedia.org/w/index.php?curid=10404903

for some parameters a and b. The choice of parameters (a,b)=(1.4,0.3) is called the classical Hénon map, which exhibits chaotic behavior.

Evolution of the Hénon map for a given choice of initial conditions. By Akarpe - Own work, CC BY-SA 3.0, https://commons.wikimedia.org/w/index.php?curid=18263865

In a map lattice, a discrete array of points are indexed and arranged in a lattice, and each site is able to evolve according to a particular type of recursion relation. In an uncoupled map lattice, each site evolves independently, e.g. by

where r is some parameter. In a coupled map lattice, the recursion for the ith site depends not only on the previous value at that site but also the adjacent site:

Forty different seedings of an uncoupled map lattice, each with a different value of r. Color indicates the value of the point in the array indexed by a particular point on the lattice. The map is chaotic and no particular structure exists in any given iteration. By Travdog8 - Own work, CC BY-SA 3.0, https://en.wikipedia.org/w/index.php?curid=22892411

In chaotic mixing, quantities such as density, viscosity, or temperature that track the flow of a fluid mix in a fractal-like way. Such fluids are governed by a system of first-order ODEs. For a fluid governed by the Navier-Stokes equations in three dimensions, there are sufficient degrees of freedom for the fluid flow to be chaotic. 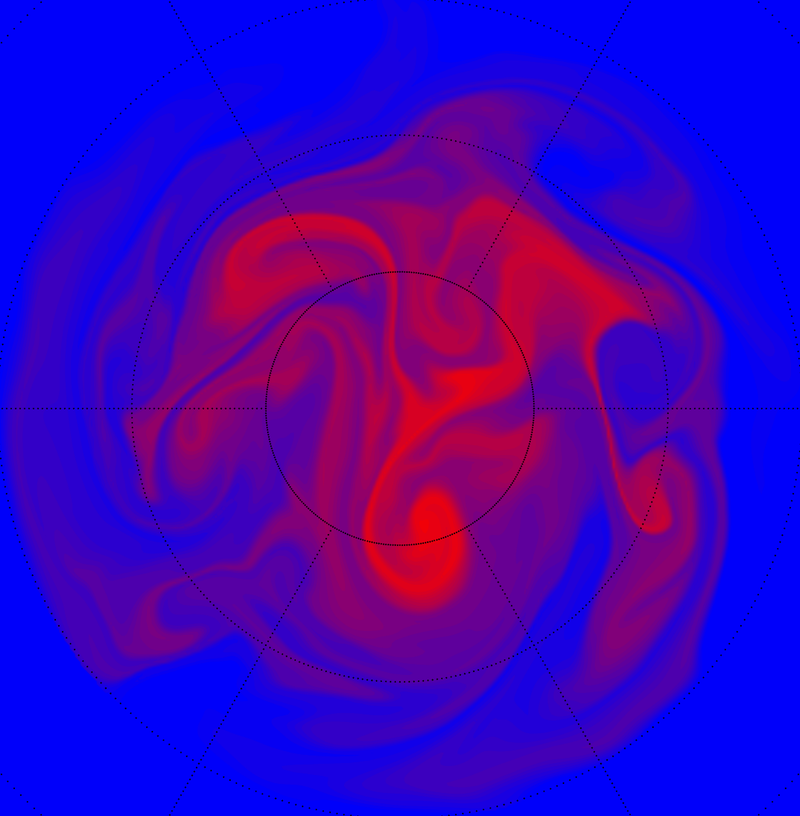 Filaments in a fluid, indicated in red, mixing in a chaotic way as the fluid flows. By Peteymills - Own work, CC0, https://commons.wikimedia.org/w/index.php?curid=18966717

for some parameters A,B, and C. It is a model used in physics for a series of pulses of laser light interacting in a nonlinear medium called an optical resonator. The parameter B characterizes how lossy the resonator is. 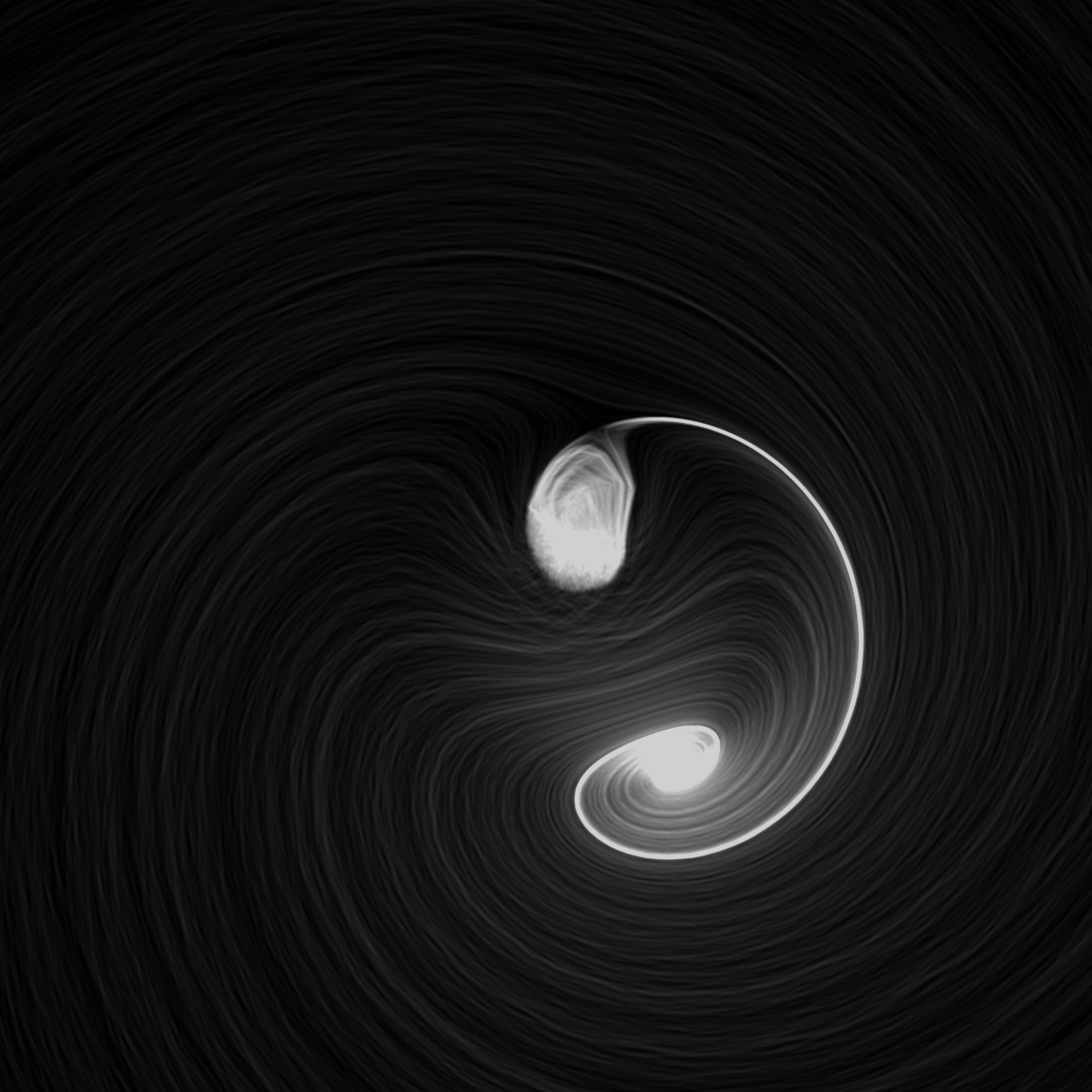 Trajectories of random initial conditions for the Ikeda map. By Accelerometer (Own work) [CC BY-SA 3.0 (http://creativecommons.org/licenses/by-sa/3.0)], via Wikimedia Commons

The standard map is a dynamical system defined as a recursion relation on the square, that is

with pn​, θn​ modulo 2π and K some constant. It describes the momentum and angle of a particle constrained to a ring which experiences periodic kicks in a particular direction of strength K, that is, a particle obeying the Hamiltonian

with the extra constraint that the momentum be periodic. This system is called the kicked rotator and the constant K is called the kicking strength. It arises in the study of any periodically kicked systems and is thus particularly useful in physics with particles confined to a ring, such as accelerator or plasma physics. 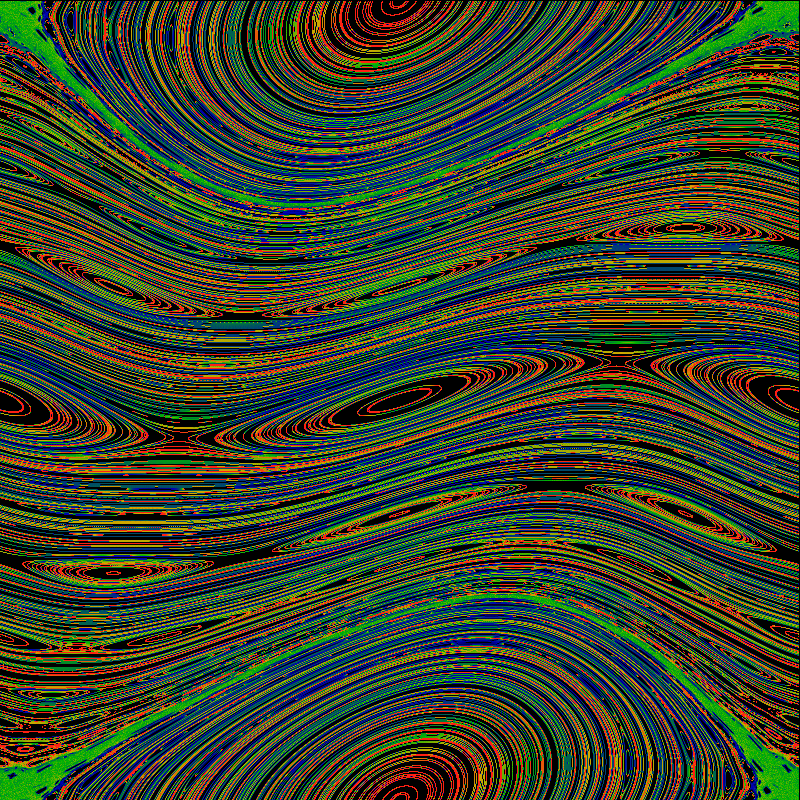