Information compression is a technique used in logic puzzles which require one to compress information to communicate effectively. Typical examples of this type of problems include finding oddly weighted coins using a balance and a minimal number of weighings, and people being lined up with their hats on their heads, where some or all of them have to guess their hat color correctly in order to survive.

When solving logic puzzles, it is often useful to think combinatorially: consider the size of the space of possible outcomes, and then to consider how those outcomes can be distinguished given the tools of the problem. This kind of analysis will generally give some bounds on possible solutions, but will often point the way toward a successful solution as well.

There are eight identical-looking coins; one of these coins is odd and is known to be heavier than the other coins. What is the minimum number of weighing needed to identify the fake coin with a two-pan balance scale without weights?

Note that the first weighing splits the eight possible outcomes into three groups: if they weigh the same, there are two possibilities, and if one is heavier, there are three possibilities on either side.

Problem-solving ideas:
1. Count total outcomes.
2. Consider how the steps in a process divide the outcomes into groups.
3. Bound the number of steps.
4. Construct a process that comes as close to the bound as possible.

The following more difficult problem is an example of these ideas in practice.

There are twelve identical-looking coins; one of these coins is odd and is known to be either heavier or lighter than the other coins. What is the minimum number of weighings, with a two-pan balance scale without weights, needed to identify the coin and whether it is heavier or lighter?

Instead of diving into multiple cases, first consider the process. At each step we choose some coins and weigh them. There are three cases: the left side is heavier, the right side is heavier, or they balance. How many distinct outcomes are there at the beginning of the problem? The solution space has 24 distinct outcomes: any one of the twelve coins can be the odd coin, and it can be heavier or lighter. (This is step 1.)

These 24 outcomes are split into three groups based on the three cases. The goal of the problem is to split the outcomes into groups based on the results of weighings, until the groups contain only one outcome each. The number of different groups is at most 3n, where n is the number of weighings, so 3n≥24, so n≥3. This shows that it will take at least three weighings to identify the coin. (This is steps 2 and 3.)

This analysis also gives a clue as to the optimal procedure (step 4). At each stage, try to arrange the weighings so that the three cases split the possible outcomes into groups of roughly equal size.

If the coins in the first weighing balance, the second weighing should be IJ vs. AK. If they balance, then L is the odd coin, and weighing it against A determines whether it's heavy or light. If IJ is heavier, then either I or J is heavy or K is light. To determine which of these three is true, weigh AI vs. BJ. The same thing applies with "heavy" and "light" reversed if IJ is lighter.

Notice that the second weighing split the 8 outcomes into groups of 3,3, and 2, which is the optimal division.

If (without loss of generality) ABCD is heavier, weigh ABE against CDF next. If they balance, then either G is light or H is light, and the third weighing of G vs. H will determine which. If ABE is heavier, then either A is heavy, B is heavy, or F is light, and we can weigh AI vs. BJ to determine which. A similar idea applies if CDF is heavier. Again, the weighing splits the eight outcomes into groups of 3,3, and 2.

The procedure described here will solve the problem with three weighings, which has been shown to be the minimum possible; so the answer is 3. □​

You have a unique three-pan balance with which to measure the weight of coins. This balance has three pans, as its name implies. Each pan can be loaded with any number of coins after which you may press a button to turn the balance on. If all three pans have different weights, the scale will indicate to you the pan that has the 2nd heaviest weight (so the pan that is not the heaviest nor lightest). However, if any two pans have the same weight, then the scale will read "ERROR" (because there is no unique 2nd heaviest weight). After that, the balance switches off, and you can unload and reload the pans again for the next use.

In a pile of 64 coins, all but one of them have the same weight; the odd one is heavier. You want to identify this heavier coin in as few button presses (uses of the balance) as possible. With the best strategy, how many button presses do you need in the worst case?

One way to summarize the problem-solving ideas in the previous section is that giving a lower bound for the "difficulty" of the solution made the best solution clearer. Here is a similar example in a different context. 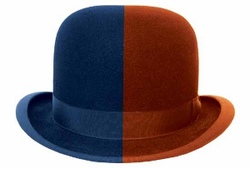 Three people enter a room and have a red or blue hat placed on their head. They cannot see their own hat, but can see the other hats. The color of each hat is purely random. All hats could be red, or blue, or 1 blue and 2 red, or 2 blue and 1 red. They need to guess their own hat color by writing it on a piece of paper, or they can write "pass." They cannot communicate with each other in any way once the game starts. But they can have a strategy meeting before the game. If at least one of them guesses correctly they win $50,000 each, but if anyone guesses incorrectly they all get nothing. Using optimal strategy, what is the maximal percentage chance of winning that can be achieved? E.g., if you think the answer is 50 % chance of winning, type in your answer as 50.

Hint: Note that if the game is repeated many times, and we tabulate the total number of right guesses and wrong guesses, these numbers will tend to be roughly equal, because the chance of any one particular guess being correct is 50%. So for the players to win more than 50% of the time, their strategy must involve them all guessing wrong when they are wrong, and only one guessing right when they are right. This way, the wrong guesses are clustered together and the right guesses are spread out.

Problem-solving ideas:
1. Think combinatorially; count outcomes.
2. Consider the effect of multiple trials with every outcome represented equally often. Note that individual guess probabilities are strategy-independent.
3. Use the individual probabilities to decide how the guesses would be distributed between the various trials "in an ideal world."
4. Construct a strategy that distributes those guesses accordingly.

Here is an example of these ideas in action.

This is a slightly modified version of this discussion.

Suppose there are n prisoners. The warden has many hats of n different colors in his closet. The warden tells the prisoners that he will pick a hat at random from his closet for each of the prisoners (he tells them the n possible colors that the hats can have). Note that the hats he chooses might all be of the same color, or all different colors. Each prisoner can see everyone else's hat but not his or her own. Once the hats are put on, the prisoners are to guess their own hat color (by writing it on a piece of paper). The prisoners go free if at least one of them guesses correctly. There is no penalty for incorrect guessing.

The prisoners are given a short break to plan strategy. Once they are in the room, no communication or movement of any kind is allowed. What is the probability that they go free, if they play optimally?

As in the earlier hat problem, consider the total number of incorrect and correct guesses, if the trials are repeated over all nn of the different outcomes (counting them is step 1). Each prisoner has a 1/n chance of guessing correctly, and there are n prisoners, so on average there will be one correct guess (step 2). Here the priority is the opposite of the above problem; the goal is to spread out the correct guesses evenly so exactly one prisoner guesses correctly in each of the nn different situations. If this can be done, the prisoners can guarantee that they go free in every case. (This is step 3.)

Looking at sums was useful in other problems, and the fact that there are n colors suggests looking mod n somehow. Suppose we relabel the colors 0,1,2,…,n−1. Then prisoner i can guess that the sum of the hats (including his) is i mod n. That will translate to a unique hat color guess; if the sum of the hats that the prisoner sees is j, then the prisoner guesses that his hat color is j−i mod n. And exactly one prisoner will be right about the sum mod n, so exactly one prisoner will guess the right hat color. So the probability that they go free is 1.

As in the coin problems, the point is that a global consideration of bounds and sizes gives a blueprint for constructing the best strategy. □​

Sometimes the severity of the restrictions on the transmittable amount of information helps to indicate the correct solution, in a similar way to the problems in the previous section. That is, the choice of strategies is so limited by the conditions of the problem that it can be used to give an upper bound on the success rate of any strategy.

Problem-solving strategies:
1. Decide how much information can be transmitted between the participants.
2. Give an upper bound for the success rate of any strategy based on step 1.
3. Find a solution that is as close as possible to the bounds in the first two steps. 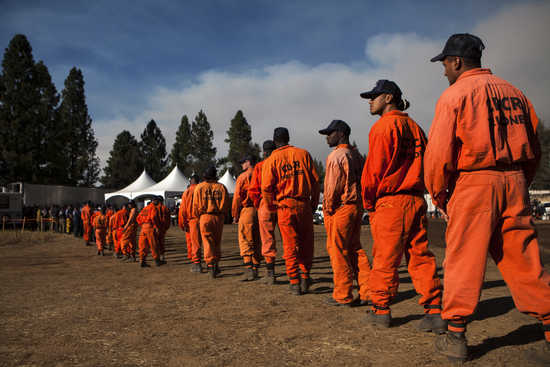 A stark raving mad king tells 100 wise prisoners that he is about to line them up and place either a red or blue hat on each head. Once lined up, they must not communicate amongst themselves, nor attempt to look behind them, and nor remove their own hat. They will be able to see all the hats in front of them but not their own hat nor the hats behind them, although they will be able to hear the answers from all those behind them.

Before they are lined up, the king makes it clear that if anyone breaks the rules then all of them will die. While the prisoners consult each other for a few minutes before they line up, the king listens in to make sure they don't devise a plan to communicate anything more than their guess of red or blue.

What is the maximum expected number of men that can be guaranteed to be saved?

Unfortunately, this means #1 has a 50% chance of survival but it guarantees everyone else's survival. So all 99 of them are guaranteed to survive, which gives the overall expected survival rate of 99.5% that we previously identified as the best possible. □​

You are asked to guess an integer between 1 and N inclusive.

Each time you make a guess, you are told either

What is the maximum N for which you are guaranteed to accomplish this?


Clarification: For example, if you were allowed to guess too high once and too low once, you could guarantee to guess the right answer if N=5, but not for N>5. So, in this case, the answer would be 5.