[1] Fireworks are pyrotechnic devices or explosives used for artistic purposes in pageantry.

The first fireworks were created in China and were used for ceremonial purposes. By the tenth century, the black powder used to fuel fireworks was also being incorporated into weapons, an idea that spread across the Middle East and Europe by the 1300's.

The explosion of fireworks is an exothermic redox reaction. The fuel oxidizes (burns) quickly, causing a great buildup in pressure that eventually leads to solids and gases bursting across the sky in colorful patterns.

A firework must contain:

Of the four basic components, which most determines the characteristics of the firework, such as size and height? 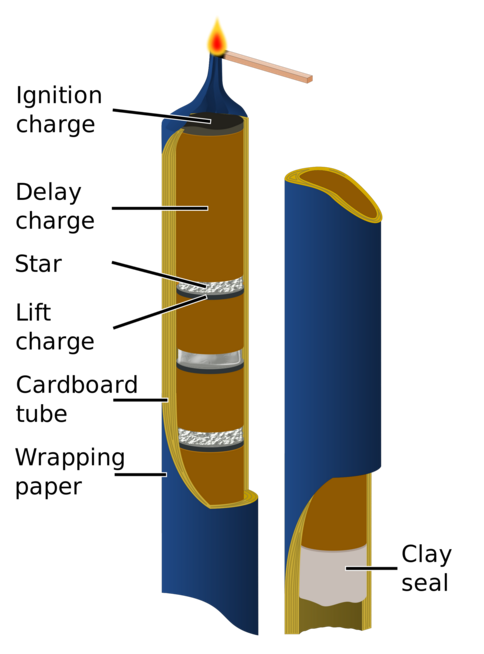 The interior of a Roman candle, a small firework that generally has multiple burst of the same color [5]

Fireworks can be engineered as a "multibreak" shell, where several isolated chambers contain different chemical mixtures. The chambers ignite in series. For example, a firework may start as a green burst, before morphing into gold stars, and then disappear into a white smoke as the fuse reaches different chambers. 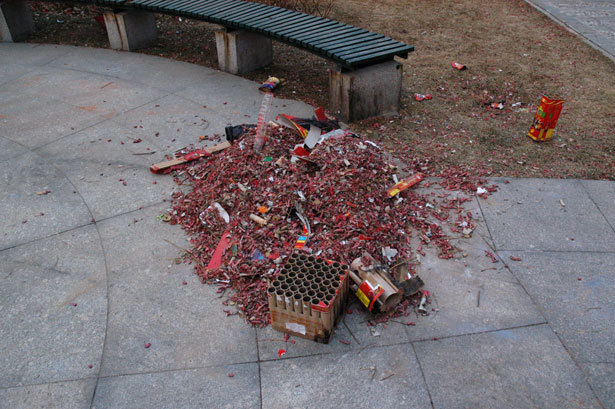 The remnants of a fireworks display [3]

The fuel is the reductant in the redox reaction. The metal transfers electrons to the oxidant. Common examples include:

The original gunpowder, called black powder, is a mixture of charcoal, saltpeter (potassium nitrate), and sulfur.

The following chemicals are often used as oxygen sources for the redox reaction:

Sodium is usually avoided as an oxidizer in most colors of fireworks, because its salts produce a bright yellow color that masks nearly every other hue.

The colors of fireworks are determined by the emission spectra of the elements included. When atoms of a given element are excited, they change energy levels in a quantized fashion, meaning only certain values are allowed. As a result, rather than emitting a wide spectrum of electromagnetic radiation, they emit wavelengths of a single color along the spectrum. 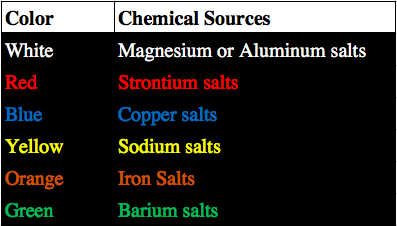 Blue is one of the most difficult colors to create in fireworks, because copper can form highly explosive compounds when mixed with certain anions, such as chloride, that are found in the redox components of fireworks.

Colored smoke, sparks, and noises are also caused by common chemicals. For example, white smoke is the result of combining potassium nitrate and sulfur, while colored smoke can be produced by adding an organic dye to potassium chlorate and sulfur. Potassium benzoate or sodium salicylate add a whistling noise to the firework. White sparks can be created using aluminum, magnesium, or titanium, and iron or charcoal will contribute gold sparks.

Preparing fireworks that have the desired colors, effects, and size without being too dangerous is a complex challenge.

What metal is most likely responsible for the color seen here? 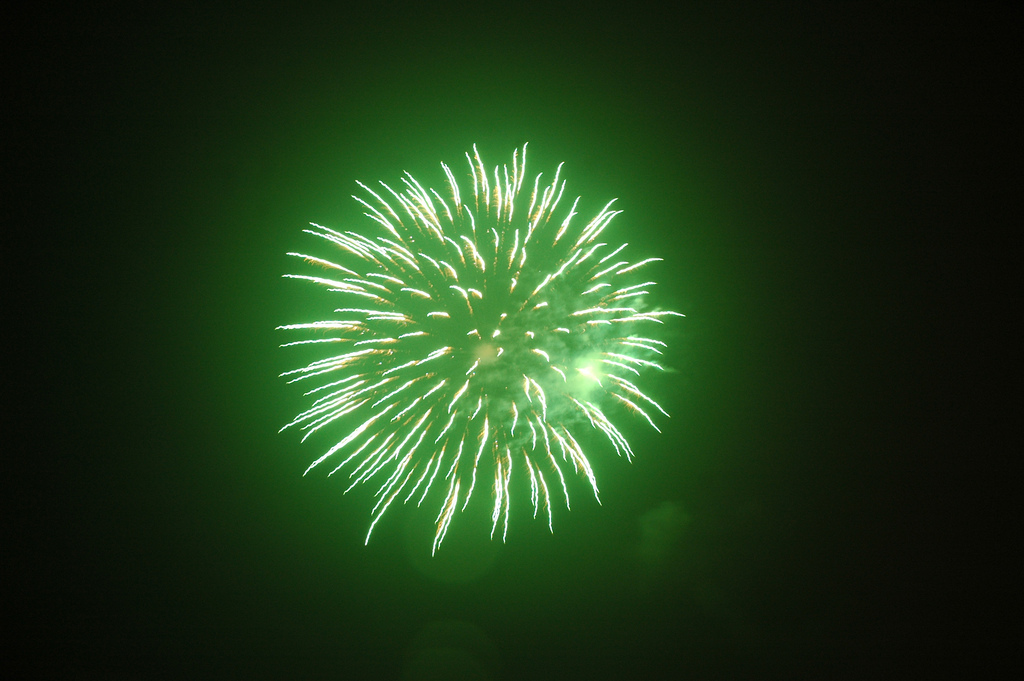 You are an engineer in charge of designing new fireworks. Your company wants you to modify one of its best selling products so that it travels farther and has a bright red color. Which of the following compounds are you LEAST likely to consider using in your new formulations?

Fireworks are inherently dangerous, and cause thousands of injuries each year. Burns are most common, causing 50% of fireworks-associated emergency room visits.

Both the open flame and the explosive nature of fireworks can cause injuries, as these plastic models illustrate [4]

Fireworks may also cause emotional distress to sensitive individuals. In particular, war veterans or refugees from war zones may experience flashbacks or have their post-traumatic stress disorder (PTSD) exacerbated by loud explosions. Ironically, the celebration of an independence day or a military victory with fireworks may be very distressing to former soldiers.

[1] Image from https://commons.wikimedia.org/wiki/File:Fuochi_d%27artificio.gif under Creative Commons licensing for reuse and modification.

[2] Image from https://www.flickr.com/photos/epicfireworks/8838128619 under Creative Commons licensing for reuse and modification.

[3] Image from http://www.publicdomainpictures.net/view-image.php?image=5515&picture=firework-remnants under Creative Commons licensing for reuse and modification.

[5] Image from https://commons.wikimedia.org/wiki/File:Romancandlestructure_drawing-en.svg under Creative Commons licensing for reuse and modification.