Nuclear decay occurs when the nucleus of an atom is unstable and spontaneously emits energy in the form of radiation. The result is that the nucleus changes into the nucleus of one or more other elements. These daughter nuclei have a lower mass and are more stable (lower in energy) than the parent nucleus. Nuclear decay is also called radioactive decay, and it occurs in a series of sequential reactions until a stable nucleus is reached.

The neutron-to-proton ratio (n:p or pn​) determines whether or not an atom is stable. Elements with a ratio close to or equal to one are considered stable. Regardless of the neutron-proton ratio, all elements with an atomic number greater than 83 are unstable and therefore radioactive. 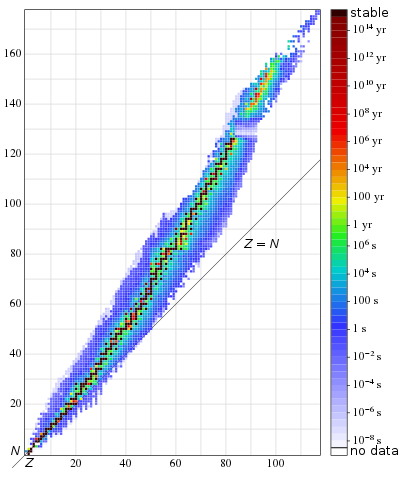 Image from https://en.m.wikipedia.org/wiki/Neutron–protonratio#/media/File%3AIsotopesandhalf-life.svg under the license in public domain

The black line in the picture above shows the stability band, where the ratio is equal to 1:1. As the atomic number increases, the graph curves upward. As atomic mass increases, a larger number of neutrons are required to overcome the strong electrostatic repulsion between the protons. These atoms do not have a stable pn​ ratio. To overcome this instability, the nucleus of the atom emits energy. The emissions are called radioactivity.

There are six common types of nuclear decay.

1. Alpha decay produces a helium-4 nucleus, which is also known as an alpha particle. The daughter nucleus therefore contains two fewer protons and two fewer neutrons than the parent. This type of emission is commonly observed in nuclei where the atomic mass is 200 or greater.

2. Beta decay is commonly observed in nuclei that have a large number of neutrons. A neutron is split into a proton and a high-energy electron (called the beta particle), the latter of which is ejected from the nucleus.

Which of the following does not change when an element undergoes beta decay?

3. Electron capture occurs when an electron in the inner shell combines with a proton to form a neutron. Once there is an opening in the inner shell, a second electron will move down to a lower energy state, leading to emission of an X-ray. 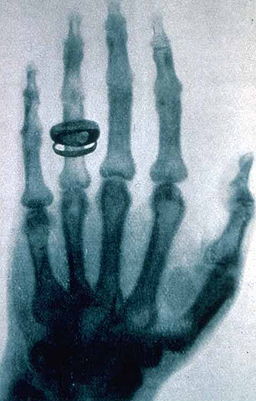 4. Gamma emission is unique in that it does not necessarily change one element into another. Often, the products of nuclear decay reactions are formed in an excited state. Similar to the way an electron in an excited state will emit energy as it returns to the ground state, the daughter nuclei release a high-energy photon (a gamma ray) as it reaches its stable form. This process may take place instantaneously or several hours after the first nuclear reaction has taken place, depending on the element. 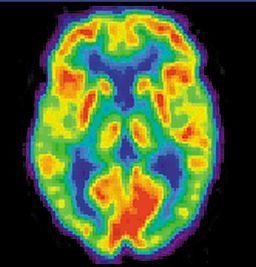 PET image of a human brain[2]

6. Spontaneous fission occurs when a nucleus breaks completely, creating two separate pieces with different atomic numbers and atomic masses. An element must be very massive and have a high neutron-to-proton ratio in order to undergo spontaneous fission. Fission emits a large amount of energy. 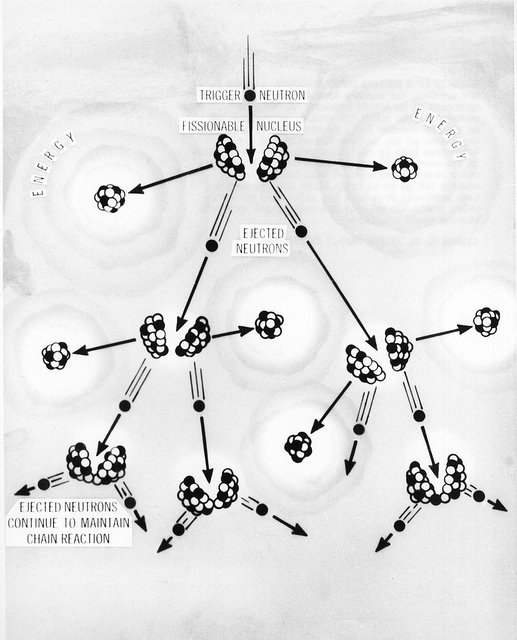 A chain reaction of uranium fission is a powerful source of energy.[3]

The rate of radioactive disintegration is always directly proportional to the number of atoms present in the sample at a given point of time.

Radioactive disintegration can be expressed mathematically as follows, since the radioactive decay increases exponentially the mathematical expression imprints the same:

where λ is the decay constant, or the disintegration constant, which can be determined as follows:

If 10% of a substance decays in 10 days, then what is approximate percentage of the substance left after 24 days?

Half-life (t1/2​) is defined as the time taken for half of the original number of atoms in a radioactive sample to disintegrate. The half-life remains constant. Even if the sample has undergone one half-life, the time period for the next half-life remains unchanged.

The decay constant of an element is 0.5 per day. Find the half-life of the element in days.

The average lifetime of a radioactive material is the inverse of the decay constant.

During World War II, both Germany and the United States began experimenting with the use of nuclear reactions to build weapons, with the United States succeeding first and dropping two atomic bombs on Japanese cities in August 1945. The Manhattan Project, which led to the development of the U.S. Department of Energy and the national laboratories, was a secret project that connect far-flung facilities throughout the country, including Oak Ridge, TN; Chicago, IL; Los Alamos, NM; and Hanford, WA. These facilities were often in rural areas both due to the secretive nature of the work and due to the space and machinery needed to process the elements for the bomb's cores and to test the weapons.

The destructive power of atomic weapons comes from the energy produced by splitting the nuclei of the elements in the bombs' core. The U.S. developed two types of atomic bombs during the World War II. The first, which was nicknamed Little Boy, was dropped on the Japanese city of Hiroshima was a gun-type weapon with a uranium core. The second weapon, dropped on Nagasaki, was called Fat Man and was an implosion-type device with a plutonium core.

The exact designs of nuclear weapons are not publicly available, but the basic scientific concepts are discussed below.

The isotopes uranium-235 and plutonium-239 were selected for their ability to easily undergo fission. When a neutron strikes the nucleus of an atom belonging to one of these species, it splits the nucleus into fragments and releases energy. The fission process becomes self-sustaining as neutrons produced by the splitting of atom strike nearby nuclei and produce more fission. This is known as a chain reaction and it ultimately leads to an atomic explosion.

Little Boy was powered by the uranium isotope U-235, which required an extensive extraction and enrichment process. Most uranium found naturally in the world exists as U-238, with less than 1% naturally existing as the U-235 isotope. When a neutron bombards U-238, the isotope often captures the neutron to become U-239, failing to fission or instigate the chain reaction necessary to detonate a bomb. The first challenge of the Manhattan Project was to determine the most efficient way to separate and purify U-235. Once enough U-235 was obtained to power the bomb, Little Boy was constructed using a gun-type design that fired one portion of U-235 at another inside the bomb. The combined masses reached the critical point to set off a fission chain reaction.

Fat Man could not use the same gun-type design that allowed Little Boy to explode effectively—the form of plutonium collected from the nuclear reactors at Hanford, WA for the bomb would not allow for this strategy due to the presence of traces of the isotope Pu-240. Plutonium-240’s higher fission rate would cause the atoms to undergo spontaneous fission before the gun-type design could bring the two masses of plutonium together, which would lower the energy involved in the actual detonation of the bomb.

The new design used conventional explosives around a central plutonium mass to consolidate the plutonium, increasing the pressure and density. An increased density allowed the plutonium to reach its critical mass. To detonate the bomb, the explosives were ignited, releasing a shock wave that compressed the inner plutonium and led to its explosion. 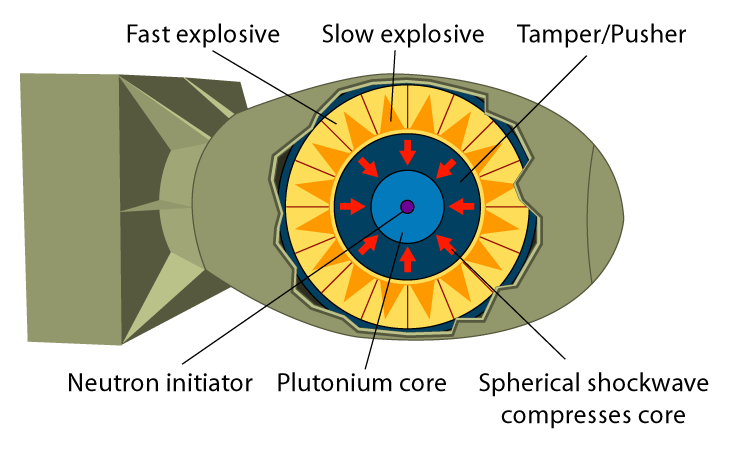