Symmetry describes when several parts of an object are identical, such that it's possible to flip, spin, and/or move the object without ultimately changing what it looks like. Symmetry is extremely powerful and beautiful problem-solving tool and it appears all over the place: in art, architecture, nature, and all fields of mathematics! The three basic kinds of 2-dimensional symmetry are reflection, rotation, and translation. After having fun reading through this page, you will be able to recognize all forms of 2-dimensional symmetry.

In fact, soon you won't be able to stop seeing symmetry! It's everywhere, even in the letters on this page for example.

The above are a few letters in the English alphabet that have different styles of symmetry (a rotation and two different reflections).

We will explore all of the beautiful kinds of symmetry in detail below.

Rotational symmetry: An object has rotational symmetry if it looks unchanged after being turned (rotated) by some specific amount less than a full 360-degree spin. The center-point of the spin is called the point of symmetry of the rotation.

Let's look at some of the letters in the alphabet which have rotational symmetry.

Turn any book that you're reading upside-down (a 180-degree rotation)--many letters like S and Z will be 'unaffected.'

When an object has rotational symmetry, the order of that symmetry is the number of different positions in which, after some precise amount of rotation, the object looks exactly the same as it did originally.

For example, look at the following diagram:

What is the order of rotational symmetry of the world's tallest Ferris wheel, also known as the London Eye? 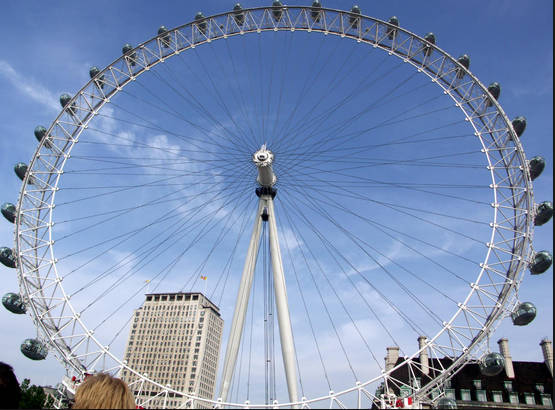 What is the order of rotational symmetry possessed by the parallelogram shown below?

In a parallelogram, the opposite sides are parallel and its diagonals bisect each other.

We will rotate the parallelogram by 90∘ in each successive turn till one complete revolution and then see how many times it has attained the same look as the original one. 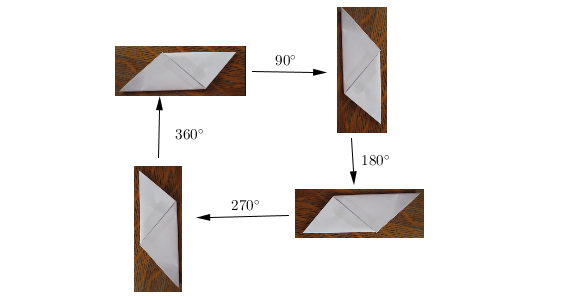 The parallelogram attained the same look two times in one complete rotation, i.e. one after 180∘ rotation and another after 360∘ rotation. So the order of rotational symmetry of the parallelogram is also 2. □​

Can you find the order of rotational symmetry of the beautiful flower shown below? 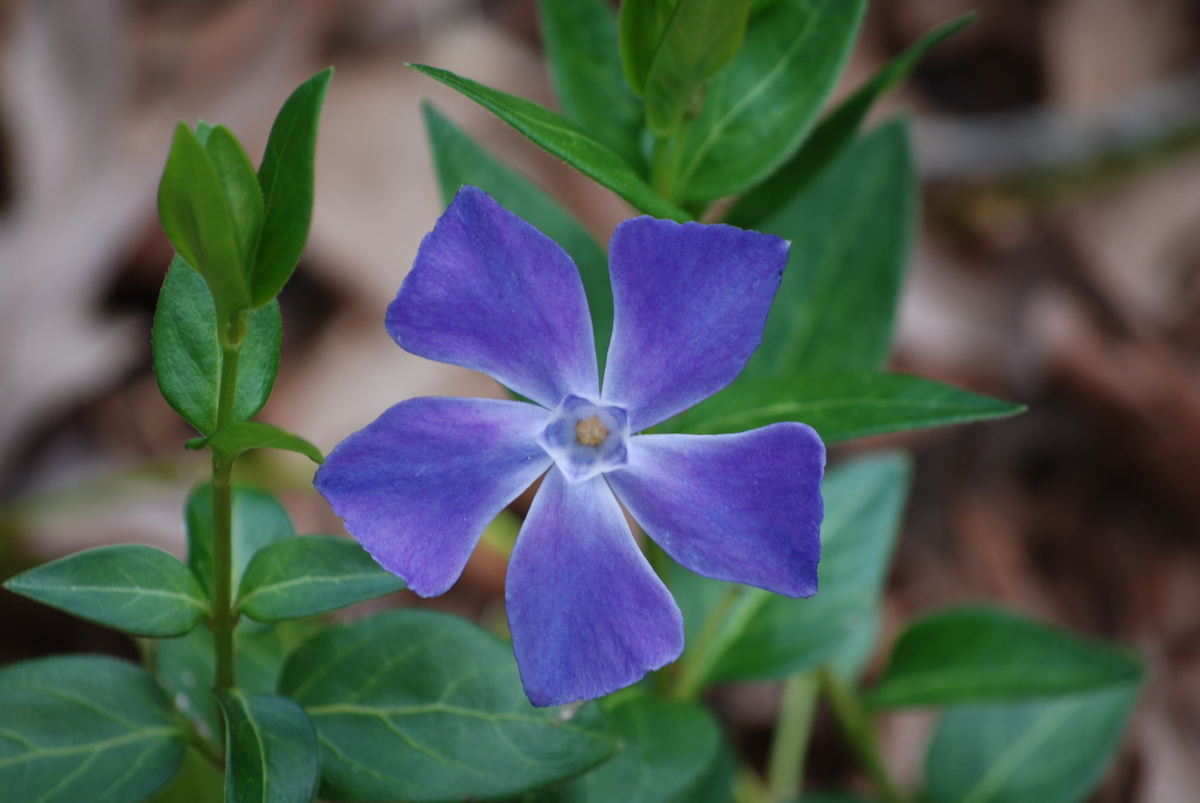 It looks the same five times when rotated through a complete cycle. Hence, the order of rotational symmetry of the flower is 5. □​

Does the Brilliant logo possess rotational symmetry? If yes, then what is its order? 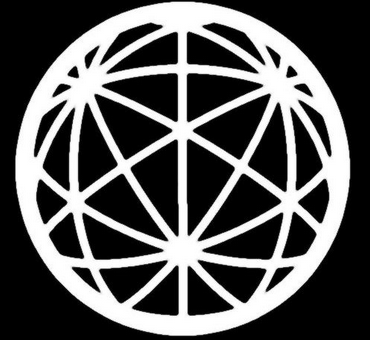 Let's take the curved triangle as our focal point. Since the triangle is curved unevenly, things will look different from each side. Therefore, the Brilliant logo does not possess rotational symmetry. □​

As we have gone through several examples of rotational symmetry, here are some problems based on the same concept: 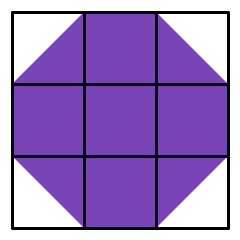 Find the order of rotational symmetry of the octagon given above. 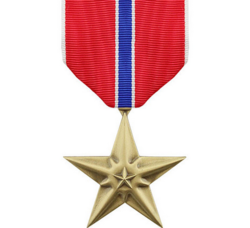 Does the US Bronze Star Medal have rotational symmetry? If so, then what is the order of symmetry?

For the purposes of this problem, ignore the striped red ribbon as part of the medal.

For example, the letters A and M, each have a vertical axis of symmetry,

the letters E and K both have horizontal axes of symmetry,

and the letters H and X have both horizontal and vertical axes of symmetry.

Discuss the symmetry of an Isosceles triangle. 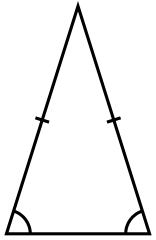 We see that if we draw a vertical line in the center, then the triangle will be divided into two parts, which are reflections of each other. Therefore an isosceles triangle has reflection symmetry. □​

Note: How do we recognize an axis of symmetry in a given object? Well, it's a skill, and it only gets better with practice!

Many geometrical figures have one or more axes of symmetry: squares, rectangles, parabolas, hyperbolas, circles, ellipses, etc. (The list is endless!) But it's easy to be tempted to see extra axes of symmetry. For example, here is a question that most people get wrong if they don't consider it carefully!

Is the diagonal of a rectangle an axis of symmetry? 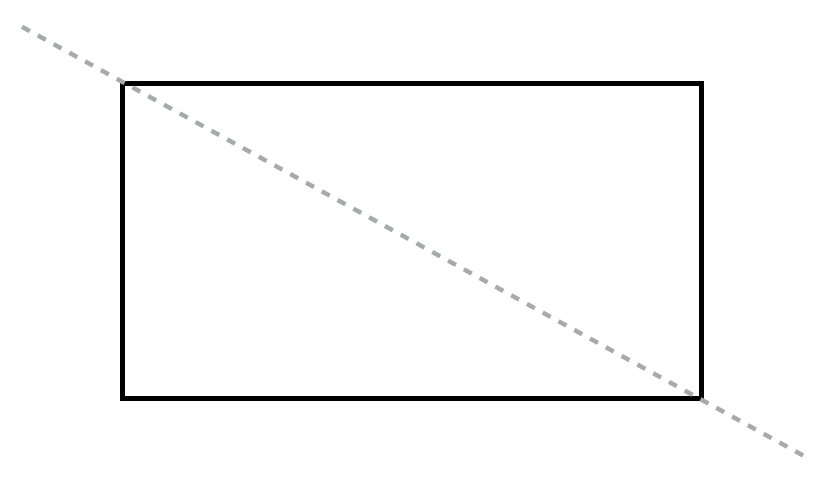 A common misconception is that all lines that divide a figure into two congruent parts are lines of symmetry. This is not always the case! For example, the diagonal of a (non-square) rectangle is not a line of symmetry. □​

Note: If you actually reflect the lower-left half of a rectangle over the diagonal, the figure you form is called a kite.

How many lines of symmetry does this regular 5-pointed star have?

The 5-pointed regular star has 5 lines of symmetry. We can see them clearly in the following figure. There is a line of symmetry passing through each of the 5 points of the star. □​

The amazing fact that reflection symmetry is abundant in nature as well compels us to love symmetry and we can have fun with it. Here is an interesting fact: More than 99% of the world's animals have reflection symmetry, including the familiar homo sapien species! 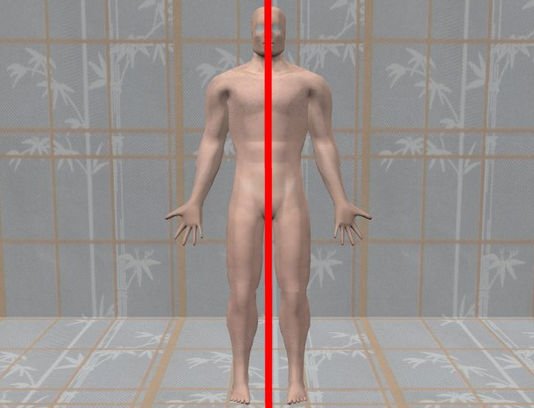 From the outside, at first sight the human body at a frontward facing angle appears to be symmetrical. We can draw a vertical axis of symmetry in the center. □​ 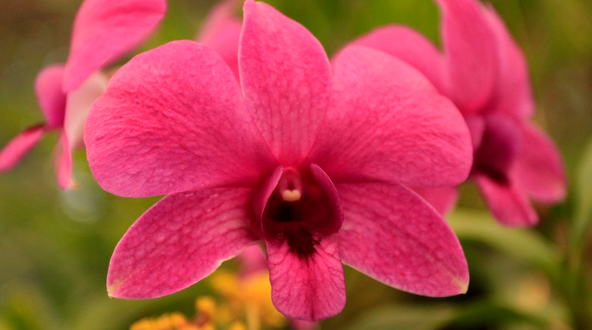 The image of an orchid flower you see above also has reflection symmetry.

Many man-made structures also exhibit reflection symmetry. Symmetry looks beautiful and appeals the eye. It's no wonder so many famous structures are symmetrical. Let's take a tour around the world here through the following examples:

One of the seven wonders of the world: Taj Mahal 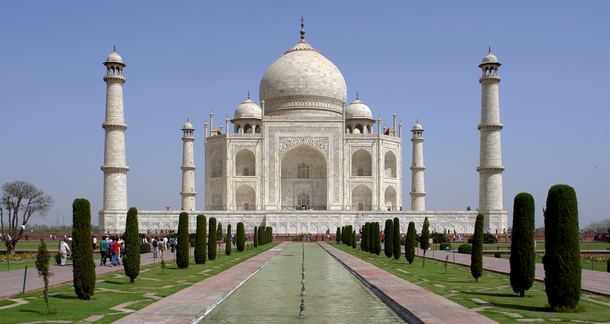 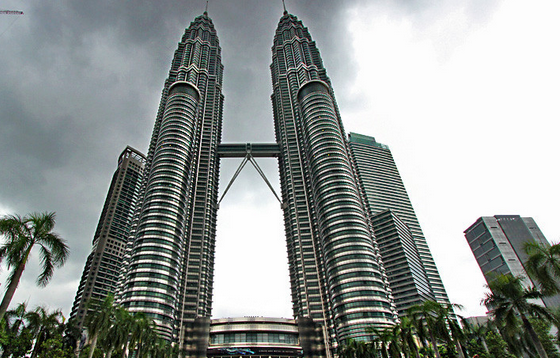 Here are a few problems for you to try yourself, which will check your understanding of the axes of symmetry. 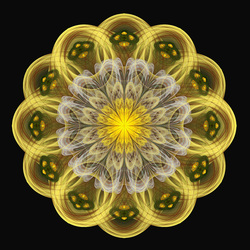 The above picture shows a beautiful example of fractal flame which is a type of fractal art. The image is aptly titled "Sunflower Glory."

How many axes of symmetry are present in the image "Sunflower Glory"?

How many of the following 8 shapes must have (at least) one axis of symmetry?

We can now easily figure out the symmetries present in an object or figure. Let's work out an example and a problem to grab our understanding about the number of lines of symmetry.

How many lines of symmetry does the Mercedes-Benz logo have? 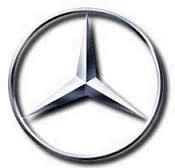 Consider a regular n-gon, where n is an even integer. How many lines of symmetry will this shape have?

There will be several different lines to count:

Thus, an n-gon with an even n has n lines of reflective symmetry. □​

Consider a circle divided up into 11 equal sections. How many lines of symmetry will this circle have? 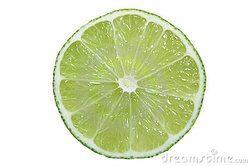 Discuss the symmetry of the snowflakes.

All snowflakes have rotational symmetry of order 6. Snowflakes are symmetrical because they reflect the internal order of the water molecules as they arrange themselves in the solid state (the process of crystallization). Water molecules in the solid state, such as in ice and snow, form weak bonds (called hydrogen bonds) to one another. These ordered arrangements result in the basic symmetrical, hexagonal shape of the snowflake. □​ 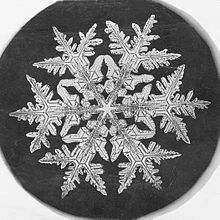 When he was 20, Wilson Alwyn “Snowflake” Bentley photographed his first snowflake by perfecting the process of catching the flakes on black velvet before they melted or sublimated. He pioneered the art of snowflake photography, and captured over 5000 beautiful images for us.

In the above image, how many lines of symmetry does the snowflake have?

Translational symmetry: Translational symmetry is when a pattern looks the same before and after it has been moved ("translated") a particular distance in a specified direction. Patterns with translational symmetries look like they were created by someone with a stamp, moving in a straight line across a surface and stamping at regular intervals as they move. An example is as follows:

Let's work out some interesting examples with translational symmetry and have fun exploring them. 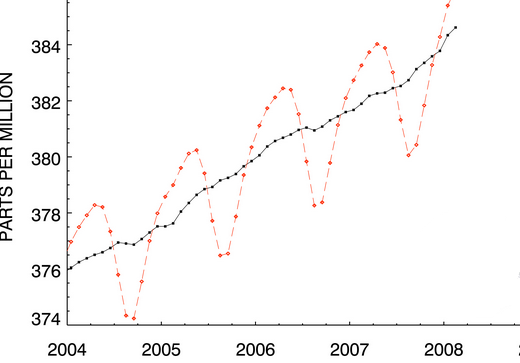 The graph of CO2​ in ppm (parts per million) has translational symmetry as you can see in the above graph. The reason behind it is as follows:

Carbon dioxide (CO2​) is an important heat-trapping (greenhouse) gas, which is released through human activities such as deforestation and burning fossil fuels, as well as natural processes such as respiration and volcanic eruptions.

The seasonal cycle is due to the vast land mass of the Northern Hemisphere, which contains the majority of land-based vegetation. The result is a decrease in atmospheric carbon dioxide during northern spring and summer when plants are absorbing CO2​ as part of photosynthesis. The pattern reverses, with an increase in atmospheric carbon dioxide during northern fall and winter. The yearly spikes during the cold months occur as annual vegetation dies and leaves fall and decompose, which releases their carbon back into the air. 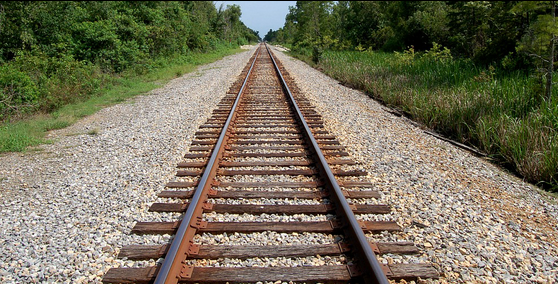 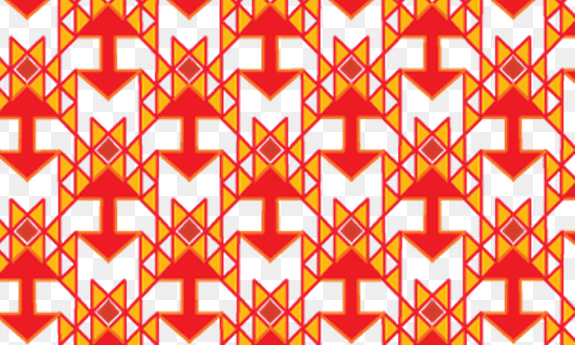 Here's one special case of transnational symmetry: a combination of sorts between a translation and a reflection called a glide reflection.

For an example, see the following:

We have gone through all the symmetry types one by one, and now let's apply different types of symmetry in the same problem!

Let's start by working through some interesting examples which use both reflectional and rotational symmetries, but no translational symmetry.

We will end this page by mentioning one amazing artist who spent much of his life exploring symmetries and creating stunning designs that combine an advanced understanding of the mathematics involved with awe-inspiring creativity! 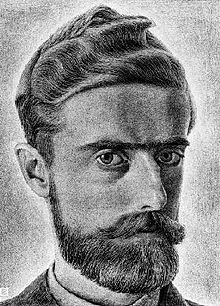 M. C. Escher was a Dutch mathematician who dedicated most of his life to studying the mathematics of tessellations. He created drawings which demonstrate the beauty of mathematics through geometry and patterns. 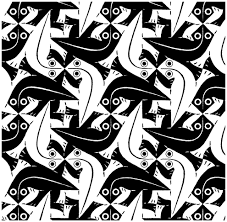 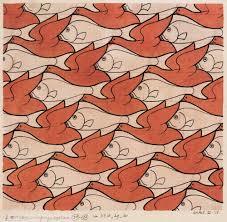 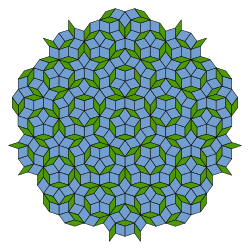 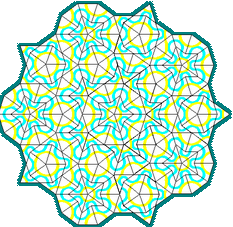 Discuss the different symmetries in a circle. 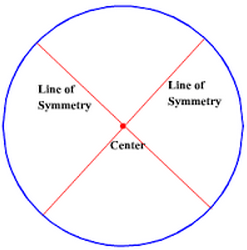 Just one more problem and we will be accomplishing all our objectives of going through this page. Here we go: 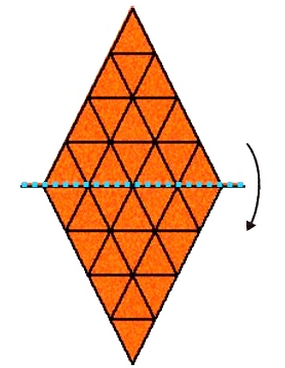 A person paints 3 small triangles in the top half of the figure blue. He then paints 5 triangles in each half green, leaving 8 in each half remain orange. When the upper half is folded down over the center line, 2 pairs of blue triangles coincide as do 3 pairs of green triangles. There are also 2 blue-orange pairs.

How many orange pairs coincide?

Let's accomplish the objectives of this page by solving the following problem:

I only I and III II only III only I, II and III 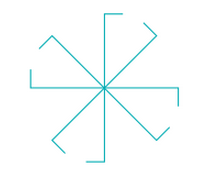 The figure at right possesses which of the following symmetry/symmetries?