This wiki is deals with the cause and effect of the motion of a particle in 1 dimension, i.e. along a straight line. Equations of motion can be used for problem solving purposes; in 1 dimensional motion a body is considered to be a point object or a particle .

Motion is the combined property of the object and the observer. There is no meaning of rest or motion without observer. Nothing is in absolute rest or in absolute motion.

An object is said to be in motion with respect to an observer, if its position changes with respect to that observer. It may happen both ways: either observer moves or object moves.

Position: The position of a particle refers to its location in the space at a certain moment of time.

Distance: The length of the actual path traveled by a particle during a given time interval is called as distance. Distance is a scalar quantity and has always a non-negative value. The SI unit of distance is meter (m).

Instantaneous Velocity: The velocity at a given instant.

Instantaneous Speed: The speed at a given instant. In vehicles, a speedometer is a gauge that displays the instantaneous speed of the vehicle.

Acceleration: The rate of change of velocity of a body is called acceleration. The SI unit of acceleration is m/s2.

A boy goes for a walk in a garden and returns back home an hour later. Is the boy's displacement zero?

The vector joining the initial position of the particle to its final position during an interval of time (or the shortest path length between two points) is called the displacement. So, here the initial and final points are the same, as the boy goes for a walk and returns back home after an hour. The shortest path length between the points is zero as they are the same. Therefore, the displacement is zero. □​

An athlete runs around a circular track of radius 3 meters. If he reaches the diametrically opposite end in 4 seconds, find his average velocity (in m/s).

We know that the ratio of total displacement to the total time taken is the average velocity. When he reaches the diametrically opposite end, which means that he has completed one half round around the track, the shortest path length between the two points is the diameter which is equal to two times the radius: (Displacement)=2×(Radius)=2×3 m=6 m. Now, the time taken is 4 seconds.

A boy has just learned rectilinear motion. He approaches his teacher with the following doubt: "Can the magnitude of displacement be more than the distance covered?" What do you think?

If the displacement-time graph of a body is a straight line , then it is said to be moving with uniform velocity. 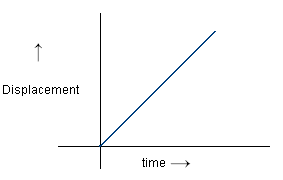 The velocity-time graph is as follows: 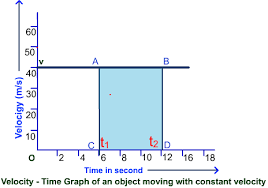 A body is falling freely under gravity. The distances covered by the body in the first, second and third second, respectively, of its motion are in the ratio __________.

Read the following paragraph and answer the three questions further below.

A particle in rectilinear motion is at origin at t=0. The velocity v of the particle relative to the distance traveled by the particle is given by v=5x+2, where v is in m/s and x is in m.

Will be completed soon.